Africa must not be carried away by western paternalism and the seemingly condemnation of everything China but concentrate on where the interests of its people will be better served.

20 years ago when the African leaders put pen to paper and formalized trade and investment agreements with China, little did they realize how much groundwork they were laying for future generations considering how much the world has changed in multilateralism. The Forum on China-Africa Cooperation (FOCAC), founded in Beijing on October 2000, has concretized the hitherto relationship between the Africa and China that had started during the Bandung Afro-Asian Conference in April 1955. Since then, the cooperation never looked back but only re-energized when FOCAC was founded. Though smaller engagement forums are formed to foster South South cooperation mechanisms, for example, BRICS (Brazil, Russia, India and South Africa), but FOCAC remains the most inclusive, thorough and impactful platform that straddles fields of politics, economics, social issues, culture and the environment. 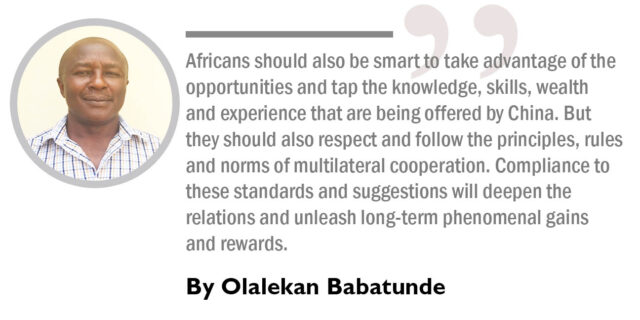 The manner in which the union’s achievements were celebrated across Africa lends credence to great value and broad experience among the peoples of the continent. It was fascinating and joyous when this union was celebrated in Abuja on Tuesday 3rdNovember by both the governments of Nigeria and China. What does that mean for Africa and China? A close watcher’s opinions and perspectives on this is important to re-evaluate the relationship with a view to identify contributions FOCAC has made particularly to the peoples of Africa and recognize its shortcomings. Understanding this aspect will help to offer suggestions on how to magnify its contributions.  In doing this, history will be of a guide.

While Africa had theirs with the European colonial powers, China suffered humiliating defeat in the hand of Japan, the British and the French in the 17thand 18thcenturie.

Africa and China share similar experiences in contemporary history. Both had suffered from invasion, plunder and enslavement by aggressors and colonialists respectively. While Africa had theirs with the European colonial powers, China suffered humiliating defeat in the hand of Japan, the British and the French in the 17thand 18thcenturies, lost territories of Hong Kong and some southern islands and destroyed Chinese civilizations. One cannot forget the attacks on China in the aftermath of the Boxer Rebellion in 1900. Therefore, the sympathy, solidarity and support both have given to each other and their lengthy relationship particularly in the post-Cold War can be understood in the light of their experiences and the foundation on which FOCAC was built.

The FOCAC initiative has demonstrated profound governments’ commitment to multilateralism as against the rising nationalism, populism, protectionism and unilateralism among powerful nations today. Kudos must be given to African leaders, Chinese scholars and financial institutions in the realization of this dream. This pandemic era could not have called for much closer cooperation. Once the coronavirus (COVID-19) took its toll on Africa, China sent huge medical and technical supports to the continent. Even when the relations between the two became strained over the alleged mistreatment of some African migrants over enforcement of the COVID-19 measures in the Chinese city of Guangzhou, both parties amicably resolved the differences and moved on. The mitigation of such formidable threat of division and tension could be attributed to the robust cooperation.

The relationship between the two parties is structured within a framework of equal treatment, respect for sovereignty, mutual benefits, win-win relations and people-to-people engagements. For instance, China supported Africa in its struggle against colonialism and aided its independence. It is part of the United Nations’ peacekeeping force to Africa. Likewise, Africa supported the “one-China policy” and the China’s bid to become a permanent member of the United Nations Security Council. Since then, the friendship has been defined by equal partnership and mutual cooperation. While African heads of states have attended summits in Beijing, Chinese political leaders like Chairman Mao Zedong, Premier Zhou Enlai, Mr. Deng Xiaoping and President Xi Jinping have visited Africa to strengthen bilateral and multilateral cooperation respectively.

The cooperation is very important to Africa. First, FOCAC has served as a platform for equal dialogue based on realistic and pragmatic principles between African countries and China. Two decades on, the cooperation has provided an avenue for political support, financial aid, and infrastructure assistance, even in times of economic and financial hardships.  It has provided high-level contacts between Africa and China that has yielded positive outcomes, though not without shortcomings.

From Africa perspective, some of these criticisms are germane, and  threatens full potential of the cooperation.

Among its criticisms are debt trap diplomacy, lack of transparency, poor imported goods, resources exploitation, environmental pollution and human rights abuses. From Africa perspective, some of these criticisms are germane. They threaten full potential of the cooperation. But to alleviate these challenges, African leaders must take full advantage of the loans and the commitment they made, including other opportunities FOCAC presents to unleash maximum benefits to their people.  They must uphold transparency and take full advantage of the changing world situation to improve the Africa-China relationship.

Through FOCAC, Africa’s goal at nation-building is being shaped. Through investment and industrialization of Africa, construction of landmark buildings and projects are achieved with aid and loans. Through the cooperation, China has given more loans to Africa than the World Bank. For example, it is common for China to facilitate Nigeria and Zambia with over US$100 million per year. This support represents 1-1½ percent of Zambia’s GDP. There have been exchanges of Africa’s rich resources and market. With the advent of China’s Belt and Road initiative since 2013, a mechanism of FOCAC, an alternative development strategy for African states was birthed. Chinese companies have sprung up across many cities of the continent while Free Trade and Economic Zones established. Ethiopia has started exporting quality-manufactured products to Europe and the United States. Global experts have touted East Africa as the rising economical and industrial region.

Roads, railways, bridges, dams, energy companies, among others have been constructed to facilitate faster and more convenient movement of people, goods and services. Remote places that used to take long hours to access or difficult places to cross are now taking few hours or minutes to reach. For instance, the Kenya’s standard-gauge railway has drastically reduced the journey between Nairobi and Mombasa Port from 12 to 4 hours and thereby creating opportunities and transforming lives.

Similarly, since the existing global order is skewed against Africa, China has through FOCAC made African lives matter. From Ethiopia, Tanzania, Benin, Malawi, Senegal, Kenya to Djibouti, people’s lives have witnessed enormous transformation. Poverty and unemployment are being addressed. Job and connectivity opportunities have grown in the past 20 years. African youth are engaged in a wide range of business that cuts across economic, financial and technological activities. Visits to typical GSM or Computer Village in Nigeria will attest to that reality. Youth are selling, buying and repairing technological and communication gadgets, unlike what it was two decades ago.

This strategic value both attached to each other must be accelerated to engender more efficient and effective investment-induced growth and development in the continent. FOCAC has assisted the continent to develop and better its society. Therefore, to maximize the gains of the last 20 years, Africa and China must strengthen the cooperation by mitigating the identified criticisms and shortcomings. More than ever before, the two must embrace each other, and internalize the cooperation catchwords and slogans such as solidarity, win-win relations, mutual friendship and people-to-people connectivity.

It is observed that due to the absence of an African overarching body to coordinate actions and processes of the cooperation, the Chinese embassies and the Chinese Follow-Up Committee drive the main role of taking initiatives and fulfilling committee, including convening meetings, collecting opinions and suggestions for FOCAC. So there is real need for African states to come to a consensus through the African Union (AU) for coordination and follow up on the FOCAC activities. AU, regional organizations such as the Economic Community of West African States (ECOWAS) and think tanks should be involved in the processes. Prior to this 20th anniversary, each African country developed its own processes for dealing with follow-up actions, and for communication with China and other FOCAC members. South Africa and Ethiopia are the only African countries with follow-up committees.

African drivers of this cooperation must continue to advocate for better business and investment relations from China.

Africa must not be carried away by western paternalism and the seemingly condemnation of everything China but concentrate on where the interests of its people will be better served. While doing this, it must not be neck-deep in debt but guide against any exploitation of resources and abuse of its citizens. African drivers of this cooperation must continue to advocate for better business and investment relations from China. It could do this by pursuing the principles of sustainable development where full risk-assessments are conducted on infrastructure and natural resource projects, open further dialogue with stakeholders; develop mining, oil and gas and regulate Chinese companies in Africa.

In addition, peace and security must be put at the heart of FOCAC because investment can be a catalyst for violence if communities are not carried along in the development that concerns them. Both African and Chinese officials must involve community stakeholders in their decision making in order to avoid suspicion and tension that usually comes with such. The Nigeria’s experience in Niger Delta is an example. Effective engagement has the potential of facilitating dialogues and fostering closer relationship between communities and Chinese companies.

Therefore, it is important for the African and Chinese governments to renew their commitment to the cooperation they entered into 20 years ago. For FOCAC to maximize its contributions in Africa, it must support the continent’s groundwork to achieve the Sustainable Development Goals (SDGs). Africans should also be smart to take advantage of the opportunities and tap the knowledge, skills, wealth and experience that are being offered by China. But they should also respect and follow the principles, rules and norms of multilateral cooperation. Compliance to these standards and suggestions will deepen the relations and unleash long-term phenomenal gains and rewards. The future of the cooperation is bright for both parties.

♦ Dr. Babatunde is a fellow, peacebuilding and evidence practitioner at the Nigeria’s Institute for Peace and Conflict Resolution, Abuja.

Hisbah Destroys Over ₦200 Million Worth Beer in Kano State