During the police brutality protests in Nigeria in October, bitcoin saved the day when the government shut out protesters from using local payment platforms for collecting donations to support it.

The young, tech-savvy protesters quickly switched to using bitcoin, and in about a week bitcoin accounted for around 40% of the nearly $400,000 raised. It was just one high-profile example of how young Nigerians increasingly use bitcoin to navigate a complicated and restrictive banking and monetary system.

In the last five years, Nigeria has traded 60,215 bitcoins, valued at more than $566 million which, apart from the US, is the largest volume worldwide on Paxful, a leading peer-to-peer bitcoin marketplace. The data scraped from Coin Dance  shows from the beginning of May 2015 to the middle of November this year, bitcoin trade in Nigeria have increased yearly at least 19% in volume since 2017, and the highest volume (20,504.50) was traded in 2020.

Bitcoin trade had its highest spike of 30% this year during the national lockdown in the country and the highest volume traded during the peak of the pandemic. between January and September, Paxful was reported to record a 137% increase in new registrations in Nigeria.” 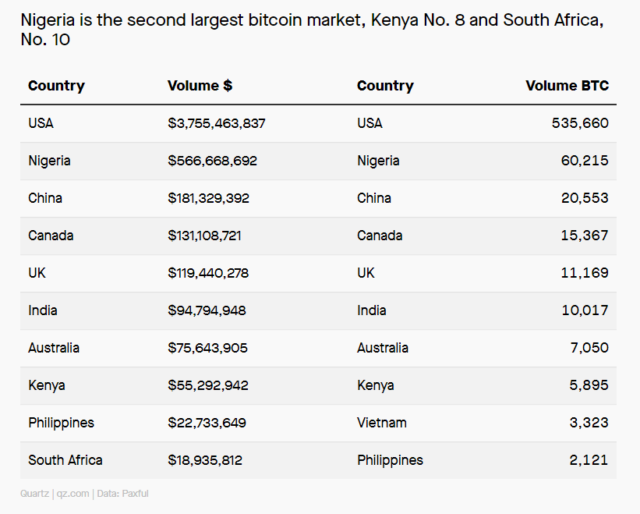 The company says Nigerians make up around a quarter of its customer base with 1.3 million registered accounts. “They mostly use the platform for peer-to-peer and arbitrage trading,” says Nena Nwachukwu, Paxful Nigeria regional manager.  “Remittances is also a popular use case.” Nwachukwu says bitcoin transfers are “much cheaper and faster than using traditional money transfer operators.”

The growing uncertainty and instability around the Nigerian naira, which has had increasingly divergent official and parallel exchange rates with the US dollar, has created an opportunity and practical use case for bitcoin trade in Nigeria. The divergent rates have long been a striking feature of Nigeria’s economy but more so in the last half decade as the country’s financial authorities have attempted to micro-manage the supply of foreign exchange and “defend” the naira.

In the last couple of years, other African countries, most prominently Zimbabwe, have seen a spike in cryptocurrency trade led by bitcoin, due to currency fluctuations and uncertain monetary policy. In some cases limits to the trade has been prompted by a lack of reliable local platforms.

“The lack of bitcoin liquidity was the first obstacle to solve to introduce bitcoin to Africa,” says Ray Youssef, co-founder of Paxful.

“People want to be able to buy and sell, transact internationally and the more the traditional channels are being restricted the more people trade crypto and mainly bitcoin,” explains Eleanya Eke, co-founder of Buycoins Africa. “And the best thing about it is that it’s almost impossible to stop. If you block the exchange it moves to Peer-to-peer platforms that are non-custodial.”

The increased awareness and availability of easy-to-use bitcoin platforms to Nigerians have largely increased bitcoin liquidity in the country, therefore solving the first problem hindering adoption. Nigerians now have several formal and semiformal bitcoin platforms to use, ranging from international platforms including Paxful, Binance, and Luno, and local ones such as Quidax, Busha, and BuyCoins. However, long-term watchers say most trading in the country is done on informal channels such as Telegram, WhatsApp bad WeChat.

“Globally, there was a shift to online transactions from the physical,” says Osaretin Victor Asemota, a Nigerian tech investor. “In Nigeria, as banks were closed, the agency outlets recorded much higher transaction volumes. I think this shift was inevitable, and it is not a temporary pandemic boost.”

Bitcoin traded as low as $3,600 in March due to a massive sell-off on global financial markets has this month surged past $20,000 for the first time. While in the past, the value has increased like this only to later dropped drastically in a few weeks, some analysts say this increase may continue into 2021 as it appears it is due to the growing interest of institutional investors in the cryptocurrency.

Institutional investors such as MassMutual and MicroStrategy were reportedly planning to purchase hundreds of million-dollar worth of bitcoin, while PayPal, a top global online payment company recently added cryptocurrency to its functionality, letting people use bitcoin to pay for things online.

Dynasty of Biden and Harris: I Finally Found My Old Blue Jeans