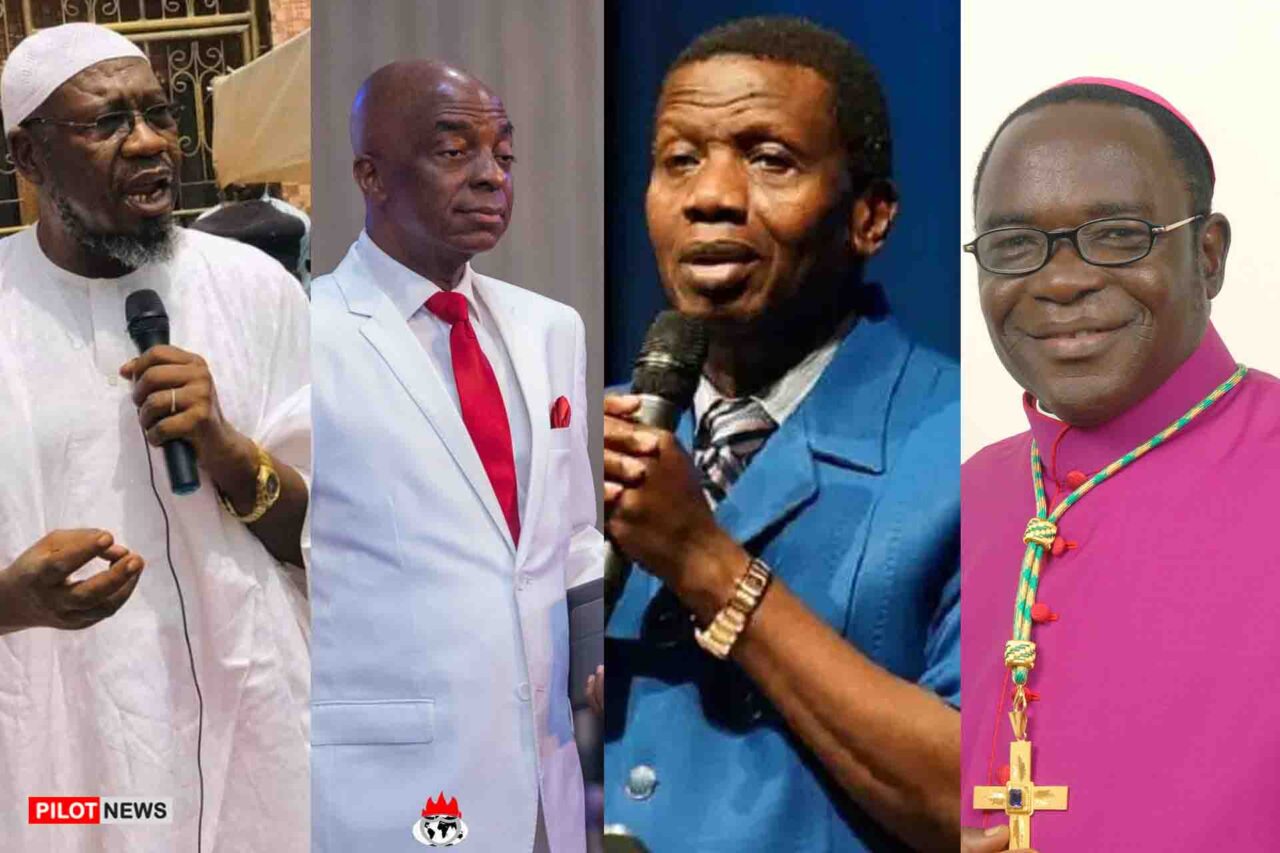 A few comments from the pulpit went viral in the month April.

The month kicked off with Islamic cleric, Sheikh Nuru Khalid slamming the government over the country’s insecurity challenges. This was followed by Pastor E. A. Adeboye taking a serious look at some worrisome issues bedeviling the country.

Tunde Bakare’s claim that the Igbos were cursed by Nigeria’s former Prime Minister, Tafawa Balewa, Leke Adeboye’s ‘Goat’ Comment and Bishop Matthew Kukah’s Easter message where he accused the Buhari government of failure also made headlines in the past month.

One of the most recent criticisms of President Buhari’s government by a cleric was the sermon delivered on Friday, April 1, by the former Imam of the Apo Legislators Quarters Central Mosque, Abuja, Sheik Nuru Khalid.

Speaking days after gunmen attacked a Kaduna-bound train killing eight people, leaving several passengers injured and abducting an unknown number of people, the cleric, in the sermon, flayed the government over its failure to tame the escalating insecurity and killings in the country.

Sheikh Khalid, who is popularly called Digital Imam, also hinted at some measures that the electorate should devise should the authorities fail to protect their lives.

He said, “Nigerian masses should resort to only one term which is – protect our lives, we will come out to vote; let us be killed, we will not come out to vote, since it’s only elections that you people know.”

Following the fiery sermon, the mosque committee of Apo Legislative Quarters suspended the Chief Imam after accusing him of using the sermon to incite public outrage. The committee also maintained that Khalid’s sermon negated the tenets of Islam.

After the mosque committee suspended him, the Sheik said he was unperturbed and also vowed to continue speaking the truth.

The committee later relieved him of his duties for ‘not showing remorse for his attitude that led to his suspension.

Meanwhile, the Digital Imam has secured a new appointment at a new Juma’a mosque behind the Central Bank of Nigeria (CBN) Quarters, in Abuja.

The General Overseer of the Redeemed Christian Church of God (RCCG), Pastor Enoch Adeboye, on Sunday, April 3, decried the rising insecurity across the nation, referencing the series of attacks and killings in Kaduna State.

In his sermon, he spoke on the incessant attacks of terrorists on Kaduna State, oil theft, and 2023 general elections.

On oil theft, he said: “It is in the news, nobody has denied it that as of now, more than 80 per cent of the oil we are producing has been stolen, or you didn’t read that in the news?

“More than 80 per cent of all the oil we are producing has been stolen. Nobody had denied it, it came from the government. That leads me to several questions. Who is stealing the oil? Where is the money going? What do they want to do with the money? Who are the foreign nations buying this stolen oil? How many of these nations of the world are your friends?”

On the 2023 general elections, the octogenarian preacher said that God is yet to reveal to him whether or not there will be an election in 2023 unlike in 2019 when God spoke to him a year before the elections.

“How come you don’t know? Because my father has not talked to me about it yet. The last time we had an election, He (God) spoke to me about the election by June of the previous year and this is April. So, it is not late but He hasn’t told me yet.”

The General Overseer of Citadel Global Community Church, formerly known as Latter Rain Assembly, Tunde Bakare, on Monday, April 4, was seen in a viral video where he claimed that the Igbo people had been cursed.

Bakare said the first Prime Minister of Nigeria, Tafawa Balewa, had cursed the Igbos before he was killed during the 1966 military coup, stressing that he needed to break the curse so the Igbos can rule like every other tribe in the country.

“Why should anyone in this country say the Igbo man cannot be president of Nigeria? I was at Imo State and I told them the reason why the Igbos cannot rule Nigeria and I want to remove the curse today.

“Do you know what happened? The day Tafawa Balewa was killed, they removed his turban, poured wine on his head, forced him to drink, and shot him. In the process, he cursed them saying, “none of your tribe will ever rule Nigeria”.

“I want to break the curse today because this generation of Igbos was not part of those people. By the authority of God’s word, I reverse the curse of Tafawa Balewa over the Igbo generation. Henceforth, the Igbo will have access to the throne-like any other Nigerian,” Bakare said.

The pastor’s comment sparked heated reaction from Igbo people, including the former Governor of Imo State, Rochas Okorocha, who countered that “the Igbos are not cursed and they will never be cursed”.

Similarly, the Christian Association of Igbo Ministers Worldwide (CAIM), in a statement, titled Bakare’s False Story Of Balewa’s Curse On Igbos, on Saturday, April 9, stressed that Bakare’s message was a rehash of a timeworn, stereotyped conspiracy theory of the 1966 Igbo coup, ostensibly carried out to entrench Igbo hegemonic domination of the Nigerian polity.

Leke Adeboye said it was not supposed to be that after Daddy G.O has preached via live broadcast on the first Sunday of the month, parish pastors will still hold a follow-up preaching.

According to him, at the end of the G.O’s sermon, pastors are supposed to do an altar call and thanksgiving and end the service afterward.

Leke posted on Instagram, “Why would you go and preach another sermon after Daddy G.O. had just finished speaking and preaching.

“You are not a son, you are a goat, sir. Next Thanksgiving Service, just do an altar call, then thanksgiving.”

This generated outrage on social media as many people called him out over such a statement considering his position in the church and the son of whom he is.

Leke was later sanctioned by the RCCG for his comment. He has also come online to tender an apology.

The Catholic Bishop of Sokoto Diocese, Reverend Matthew Hassan Kukah, in his Easter message, titled To mend a broken nation: The Easter metaphor reeled out the scorecard of President Buhari’s administration.

Kukah alleged that every aspect of life in the country had been destroyed while corruption was enthroned under Buhari.

“With everything literally broken down, our country has become one big emergency national hospital with full occupancy,” he said.

The bishop, who also criticised the president over his government’s “inability to tackle insecurity and corruption”, further claimed that President Buhari had divided Nigerians on the basis of ethnicity, religion, and region.

Reacting to the message, the Senior Special Assistant to the President on Media and Publicity, Garba Shehu, on Monday, April 18, hit back at the Catholic cleric.

In his reply titled Kukah’s Virus Of Hate, Shehu accused the cleric of hatred for the Buhari administration and using the pulpit to play politics.

“For a man who has been spreading hate for decades, nothing new in the homily, except for the fact that while millions of Christians were remembering the Lord’s crucifixion on Friday, His descent on Saturday, His resurrection on Sunday, and subsequent appearance to his disciples, Bishop Matthew Kukah was playing politics.

“From his pulpit, he devoted his Easter message not to Christ’s death and rebirth so Man might be saved – but to damning the government in the most un-Christian terms,” he wrote.

However, speaking in an interview with Arise TV on Tuesday, April 19, Kukah said no amount of intimidation would silence him in the face of injustice, insisting that the present government has performed poorly.