Who is it? Kenneth Ize is an LVMH Prize-nominated brand based between Nigeria and Italy

Why do I want it? Consciously produced fabrics in vibrant hues meet with sharp tailoring

Where can I find it? Online now at Browns – stay tuned for more styles arriving later this April

Who is it? When I speak to Kenneth Ize, he is in his studio in Lagos, Nigeria, having just returned from Italy, which – shortly after he left – went into lockdown in light of the coronavirus crisis. The clothing that he designs for his eponymous brand is produced between Africa and Europe, where he had been staying to oversee the production of a new collection. Ize’s heritage is equally cross-continental: born in Vienna to Nigerian parents, Ize grew up in the industrial landscape of the Austrian countryside. “I was so uninterested in anything industrial, even though my dad worked within that field,” he says. “I knew that I loved clothes, I loved fashion, I loved media …” Ize pursued his dreams as a teenager, enrolling at Austria’s only dedicated fashion school, Angewandte, where he honed his craft under the tutelage of Bernhard Willhelm and Hussein Chalayan. “At Angewandte I was able to develop my voice and aesthetic,” he says. “I became really interested in craftsmanship and tailoring, and African textiles.”

Upon graduating, the young designer moved to Nigeria, where he was able to start working directly with fabrics produced in the country. His first collection debuted in Spring/Summer 2016, and he has since shown at Lagos Fashion Week, leading him to be nominated for the LVMH Prize in 2019. Earlier this year, Kenneth Ize debuted his brand at Paris Fashion Week S/S20 – as one of three African designers to present during the season – to critical acclaim. “I never like to use the word ‘perfect’, but I guess the only way to describe my Paris Fashion Week debut is … perfect,” says Ize. “I had such an amazing team around me and I received so much love. It was great that everyone understood what I was trying to do. People were crying during the show! That wasn’t the plan, but I hope they were tears of happiness.”

Why do I want it? Kenneth Ize approaches luxury fashion through the lens of craftsmanship. The vibrant interwoven fabric that comprises the label’s garments is called Aso Oke, a heritage craft of Yoruba origin that Ize seeks to preserve through his work. Every piece of cloth that goes into a Kenneth Ize piece is produced by Nigerian communities that the designer has gotten to know personally and are then employed by the brand. “It’s about looking at how the products have been made from scratch,” he says. “That is very important to me. I want people who wear my clothes to feel the soul inside the clothing. It takes a person to create the fabric they are made from, and it takes days to make, within a community, weaving the cloth. It’s their life and DNA. That’s how much soul is being put into that fabric.”

A unisex capsule collection of Kenneth Ize is now available to buy at Browns, as part of the Conscious Edit – an ever-growing selection of brands and products that have been created with the future of our planet in mind. Pieces include the high-waisted and flared Okatu trousers, a long double-breasted fringed coat named the Yaba, and the Wole double-breasted blazer. Browns’ buying director Ida Petersson was drawn to the brand for its unique point of view on sustainability. “We were drawn to the incredible weaving that Kenneth has reimagined into sharp tailoring, alongside his focus on sustainable production,” Petersson explains. “And of course Kenneth himself with his amazing energy … his desire to work with local artisans and manufacturing all while spotlighting his heritage makes him a perfect addition to the Browns roster.” 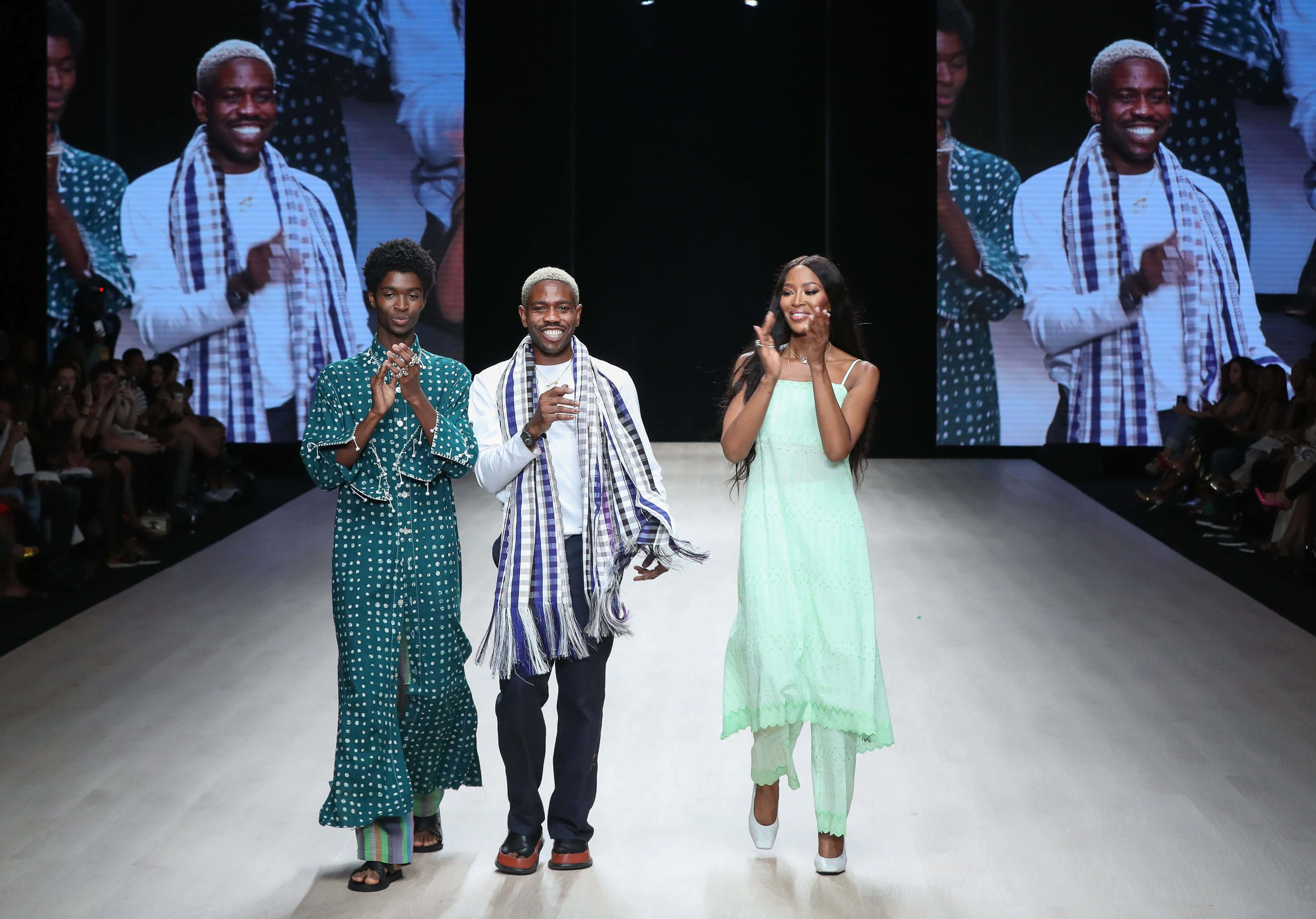 With the future of fashion so uncertain, however, what are Ize’s thoughts on how to move forward in the wake of the coronavirus pandemic? “I was just on the phone with the production team, and we were saying how we can’t wait to get back to work, but also how much will have changed,” he says. “Fashion will have to refocus, reflect on making less and making things with meaning. This is what Kenneth Ize has been doing as a brand from day one, and I hope to see others follow suit. We have to think about the positive things that can come out of this crisis – I am hopeful that this will be one of them.”