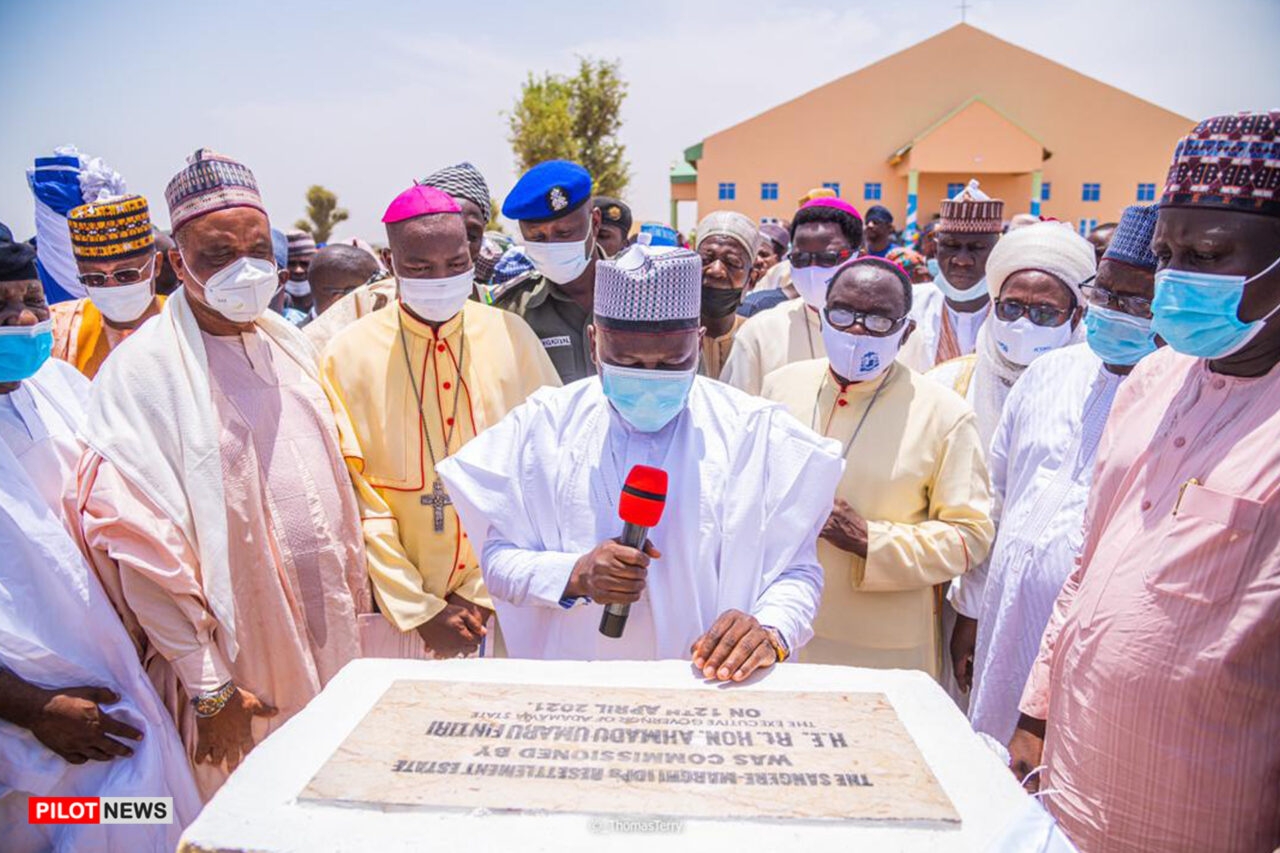 Governor Ahmadu Umaru Fintiri of Adamawa State on Monday commissioned forty-three (43) Sangere-Marghi Housing Estate built by the Catholic Diocese of Yola in collaboration with Missio Germany for the resettlement of Internally Displaced Persons (IDPs) in Adamawa.

The houses meant for the 86 families that have been taking refuge at the St Theresa’s Catholic church Yola since 2014 when Boko Haram annexed most of the local governments of Adamawa North.

The housing estate will also accommodate five hundred and sixteen (516) residents and also has a clinic, primary school, borehole, Mosque and Church buildings as well as farmlands for the settlers.

In his address at the event that was held at Sangere Marghi in Girei local government area, Governor Umaru Fintiri expressed happiness with the effort of the Diocese towards resettling the people that were displaced by insurgency since 2014.

“We are gathered to celebrate one of the outstanding humanitarian efforts in the history of our care and support as a nation.

“We are happy to be part of this effort to resettle our brothers and sisters that were displaced by insurgency since 2014 who had been living under the support and care of the Catholic Diocese of Yola led by Most Rev. Dr. Stephen Dami Mamza.

“We are aware that the Catholic Church teaches that assisting the needy is a fundamental duty derived directly from the works and the life of Jesus, who himself was a migrant and part of a refugee family when displaced to Egypt.

“The need to assist displaced persons in the process of return to their homes or resettlement involves building and construction of needed infrastructure which necessarily includes worship centres, schools and above all houses.

“We thank the Catholic Diocese of Yola and its partners like Missio Aachen and others for successfully building the needed infrastructure in this new housing estate for the resettlement of IDPs.

“May this project be a strong launchpad and model for peacebuilding and religious harmony in this community and the country at large where Christians and Muslims live together and care for each other,” Fintiri said

Fintiri said the State Government is happy with the humanitarian works of the Catholic Diocese of Yola which is focused specifically on providing foods to malnourished children and their families.

He thanked Bishop Stephen Dami Mamza for the exemplary project in humanitarian care and support and expressed optimism that the Catholic Church in Nigeria is very proud of him for being in the forefront offering humanitarian support to the IDPs in the past seven years.

Earlier in his welcome address, the State Chairman Christian Association of Nigeria (CAN) who is also the Catholic Bishop of Yola Diocese, Stephen Dami Mamza thanked Governor Umaru Fintiri for allocating the plots of land for the project and approving connection of not only the housing estate but Sangere Marghi community to the National Grid.

He appeals to government and humanitarian actors that displaced persons need to be given opportunities to be productive and self-reliant, as against being passive recipients of aid, which results in dependency syndrome as earlier highlighted.

In his remark, the Bishop of Sokoto Diocese, Most Reverend Doctor Mathew Hassan Kukah harps on the need for Muslims and Christians in the country to promote peaceful coexistence among them and appreciate the effort of the Diocese in building the project.

There were Goodwill messages from the Lamido Adamawa who was represented by the Ubandoman Adamawa and District Head of Girei Alhaji Ahmed Ibrahim Mustafa and chairman Girei local government council Mr. Juda Amisa among others.