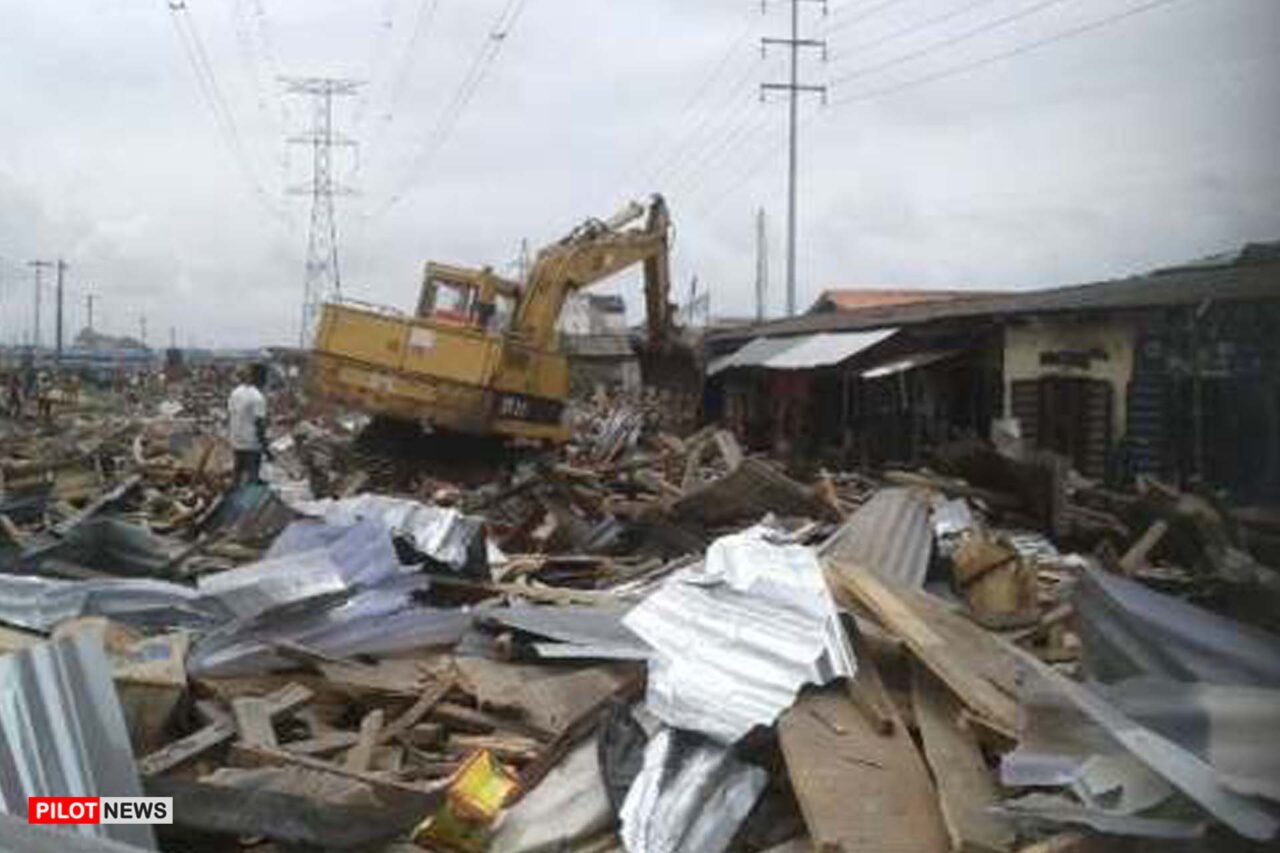 The Enugu-Port Harcourt expressway on Thursday witnessed unusual disruption, destruction of properties, and mayhem causing serious tension and panic among residents of the coal city and commuters on the ever-busy road.

Taking advantage of the situation, artisans living within the New Artisan market stalls started a riot, unleash mayhem on motorists plying the road; many unsuspecting motorists who ran into the rioters sustained degrees of injury, vehicles were looted and vandalized.

Eyewitness account said the rioters in their numbers came out to resist the bulldozers sent to demolish the market.

The bulldozers were commissioned by the family of late Igwe Gabriel Nnaji aka Nwanjaja to pull down the market so as to enforce a subsisting Enugu High court judgment over ownership of the land where the market is situated.

Speaking on the incident, ASP Daniel Ndukwe explained the crisis as a case of unlawful resistance to the execution of a court order issued by High Court of Enugu state which authorized the demolition of structures and possession of the land on which the market is situated by the Nwanjaja family of Akpugo in Nkanu West Local Government Area, Enugu State.

“The Commissioner of Police, Enugu State Command, CP Mohammed Ndatsu Aliyu, psc, has ordered the immediate launch of a thorough investigation to fish out and bring to book, miscreants whose acts of violence led to the sustaining of injuries by innocent citizens, vandalism and burning of vehicles at New Artisan Market, along Enugu/Port Harcourt Expressway Enugu at about 4pm of 22/04/2021.

“Preliminary investigation reveals that the unscrupulous elements within the market became riotous and resisted the execution of a Court Order issued by High Court of Enugu State, authorizing the demolition of structures and possession of the land area covering the market by Nwanjaja family of Akpugo in Nkanu West L.G.A of the State.”

“It further shows that unwarranted rioters set up burn-fires on the road, obstructed vehicular movement, injured unascertained number of persons, vandalized two (2) caterpillars that had gone to carry out the demolition exercise and set ablaze three (3) vehicles.”

“Meanwhile, normalcy has been restored by Police Operatives, while five (5) persons connected with the riotous act have been arrested and are helping ongoing investigation.”

“Consequently, the Commissioner has enjoined law-abiding members of the public, especially those plying the NNPC Mega Station axis of Enugu/Port Harcourt Expressway to go about their lawful businesses without fear of intimidation or harassment, as necessary measures have been taken to forestall further occurrence of the riotous act.”

The statement reads: “The attention of Enugu State Government has been drawn to the brigandage, roguery, banditry and lawlessness exhibited by some hoodlums at New Artisan Market today being Thursday, the 22nd of April 2021, acting under the cloak of demolition while surreptitiously and unlawfully disobeying an order of Court. The social and mass media have also been inundated with divergent tales of what perhaps appeared a crisis.

“It has become necessary to make it abundantly clear that the aforesaid property illegally occupied by traders, particularly livestock dealers from the North, belongs to the family of a revered traditional ruler and statesman, late HRH Igwe Gabriel Nnaji (Nwanjaja) of which there is subsisting judgment of the court to that effect.

“The Enugu State Government, Law Enforcement agencies and the leadership of the predominantly Hausa merchant community of New Artisan Market were duly briefed on the intended execution of the judgment and its implications. In line with good conscience and utmost regard for human dignity, a robust plan was set in motion to resettle these traders whose importance to the economy of the State cannot be underestimated.

“While the leadership and genuine members of the business community peacefully and gladly leveraged on the alternative property benevolently offered by the peace-loving Governor of the State, some miscreants and hoodlums who had apparently reduced the property to an abode of criminality and immorality capitalized on the prevailing circumstance to instate a crisis.

“Enugu State has a historic reputation for hospitality to her vast demography of migrant residents, which has grown stronger under the administration of His Excellency, Rt. Hon Ifeanyi Ugwuanyi. The Governor has diligently and consciously instilled the spirit of harmonious coexistence of law abiding residents within the state without prejudice to ethnic or religious sentiments. Therefore, no brigandage, disobedience of court order, gimmick or brazen lawlessness displayed by a few recalcitrant will thwart the peaceful coexistence, serene ambience and thriving amity enjoyed in the Coal City State.

“In furtherance to his unwavering commitment to protect lives and properties of the citizenry, the Governor has swiftly instructed security agencies to take absolute control of the situation and sufficiently punish anybody found in breach of the law. The Governor has also been briefed of the efforts and resilience of the Enugu State Police command to unravel the cause, extent of the destruction and those responsible for them.

The State Government then called on the general public to go about their business without fear of harassment or intimidation as the situation is now well under control.

Recall that the New Artisan market was shut down for four years by the Enugu State Government given the atrocities recorded in that area especially the violence that ensued in the market that led to death of a policeman and a civilian in 2016.