“Moving on, the government must not give its citizens the impression that they are less wanted to remain part of the union”―Ebuka Onyekwelu

No matter how successive Nigerian government decides to view the Biafra declaration which then led to a civil war that left no fewer than three million Easterners dead, the fact that cannot be disputed is, the event, cannot be erased in Nigeria’s existential history. And so, of all the possible cause of action in regards to this historical occurrence, trying to sideline, undermine, ignore, pretend it does not matter, and, or maintain deafening silence to the solemnity of that piece of history of Nigeria, is a national shame; a great disservice to the aspiration of the country, as a “single indivisible, indissoluble entity” where every citizen has equal and fair share to legitimate ambitions. So it happens that even today, exactly fifty-four years after the Republic of Biafra was declared, has Nigeria departed from the core problem that led to this declaration, in 1967? Can it be said that Nigeria has now grown past those parochial disorders that led to the war? 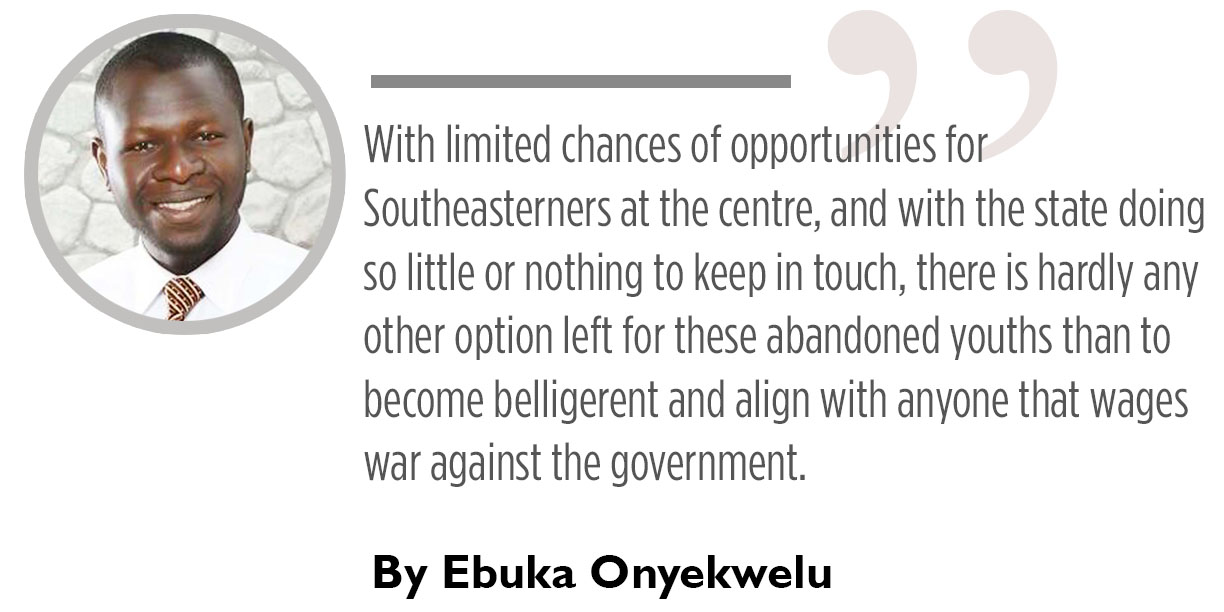 These are but some of the few fundamental questions begging for answers. Sadly, Nigeria has not done much to build a functionally responsible country where her citizens have the right of aspirations and enjoy equality of political opportunities irrespective of their ethnic origin or religion, or other persuasions. Giving these prevailing realities, it is safe to say that Nigeria has not advanced beyond the pre-war politics of identity, violence, intimidation, and the general attitude of the government that those at the endpoint of this iniquitous chain should accept their lot in good faith.

Today, it has become even more apparent that the more Nigeria tries to run from its shadows, the more furiously it is pursued by the shadows of its past. This is even more evident with the persistence by some, that May 30th be set aside as a day of honour. The precisely fifty-four years old incident; an event Nigeria has done well to stay far away from and in fact, prefers it is never mentioned. Yet each year, it resurrects and with the current regime, it is easily a consensus that the proceedings to the declaration of the Biafra republic resonate more profoundly. As much as feeling of alienation is more emotional than logical, the feeling is based on how people who so feel, are treated. In this instance, the feeling of alienation by Southeasterners in this regime is based on how they have been treated by the regime consistently for the past six years. More so, it bothers on what stake they hold in the regime, put differently, what stake they are accorded by the current government. The Buhari government has consistently openly validated this feeling of estrangement by most Southeasterners whom the president indirectly called the 5% on national television.

One thing is certain, as far as Nigeria keeps failing over such matters of fundamental fairness, Biafra agitation will keep reappearing.

Even more recently, comments like “Biafran boy”, “Spare parts dealers”, coming from top officials of the regime only goes to strengthen the suspicion that the administration is proudly against Easterners. However, more disturbing is the inciting attitude of the government over the illegality of Fulani herdsmen all over the country, particularly in the East. And so it stands to reason that so long as Nigeria continue to treat any section of her citizenry as second class, or with ignominy, questions about Nigeria’s legitimacy will continue to arise. So long as the country goes on pretending that it can technically do away with, or undermine the stake of any section of her citizens, agitation will continue to spike. As it is, Nigeria, if interested in progress has only one option; it can only function in the exact manner that reflects the aspirations of all her people fairly. Otherwise, the people will keep trying to get away from the union. One thing is certain, as far as Nigeria keeps failing over such matters of fundamental fairness, Biafra agitation will keep reappearing.

And so for the Southeast governors who also feel that because Nigeria has been working hard to deny that aspect of the country’s history, therefore they too are playing safely along. Sadly, creating a void and it is this same leadership vacuum that is threatening to destabilize the Southeast today. The very dangerous part of this development is the near absence of governance both from the federal government and the state government, leaving the people distraught, devastated, and near hopeless. There is so much to be done owing to years of missed opportunity, official corruption and diversion of public money. So even when the government at the centre barely succeeds in scratching the surface, it usually goes unnoticed because whatever was done becomes absolutely of no consequence to the lives of the people, who continue to live as if they do not have government.

Today in the Southeast, thousands of graduates have no job. Many of them would have gone back to the family business, but most of those businesses given unfavourable government policies are either extinct or struggling, and cannot accommodate them. In fact, the government for most people in the East and Nigeria at large is an agent of destruction and this is a most unfortunate commentary of the experience of Nigerians. With limited chances of opportunities for Southeasterners at the centre, and with the state doing so little or nothing to keep in touch, there is hardly any other option left for these abandoned youths than to become belligerent and align with anyone that wages war against the government.

The Nigerian government must conceive of May 30th 1967, as a classic case of leadership failure and accept the events thereafter as part of Nigeria’s learning process, rather than abhor and criminalize the symbolic nuance of that date in the country’s future. Nigerian government at the centre must therefore do well to give due recognition to the events of May 30th, if in doubt, the government can even device its own date of recognizing that part of the country’s history. Moving on, the government must not give its citizens the impression that they are less wanted to remain part of the union, while also insisting that the union is permanent. So also, the leadership of the Southeast region must rise up to the occasion because these are unusual times.

The very bold and blatant identity posturing of the government at the center has exposed, even more, the ineptitude and lack of grasp of events, by the political leadership of the Southeast. And so, they must sit up and do the needful, while the federal government sorts itself out. The states should be able to stand and give hope, provide direction, meet certain levels of infrastructure and other governance needs of the people. Biafra must be remembered as the failure of the federal government to meet the legitimate aspiration of her own people, and not as an obstinate, irrational attempt, to secede.

Biafra’s “May 30 solemnness” is now a shameful blood-spattered rite of remembrance.