AWKA — The member representing Ogbaru 11 constituency in Anambra State House of Assembly, Hon. Somto Udeze has empowered no fewer than one hundred and sixty constituents with business capital and work tools, to assist businessmen and women. 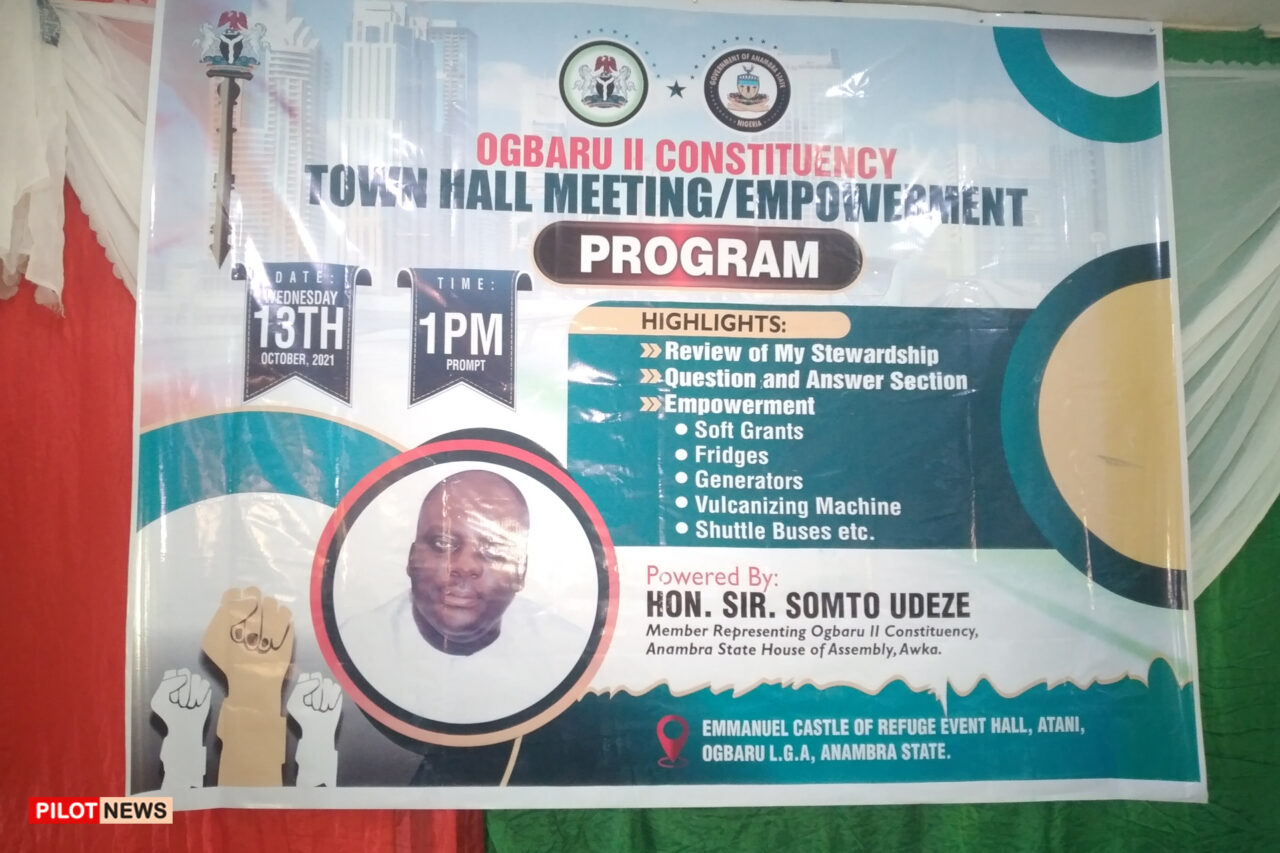 Hon. Somto Udeze explained that those given freezers and generators were to help them in their specific line of business that requires freezers and or generators. About five persons were equally empowered with shuttle buses to start transportation business. Three of Hon. Udeze’s aides were also gifted with private cars to assist with their work. The cash, vehicles, freezers, and generators were all handed over to the beneficiaries today, at Ogbaru.

Hon. Somto Udeze, a second-term member of the House of Assembly, has clearly distinguished himself according to members of his constituency. “He has always been helpful to people, he is reachable. Ogbaru people are happy with him”, said one of his constituents, in Ogbaru. But for Prince Lazarus Uzo from Umunankwo, who is also the immediate past chairman of Presidents General of Ogbaru local government area, Hon. Somto has surpassed his utmost expectation.

According to him, though he never gave Hon. Udeze a chance but from what he has seen over the years, Ogbaru has never had it this good. “What Hon. Somto is doing in terms of the quality of his representation is unprecedented. I am short of words. Nobody gave him this chance, for one, never did. But the things he has been doing, honestly, I am marveled at. We can see things for ourselves. If this is how it feels to be a legislator, then, why wouldn’t he just stay there?! I mean, there is no space. He is simply doing well. His party is not in power in the state, but look at what he is doing. I am yet to hear of any state legislator that will come close to what we are experiencing with Hon. Somto,” Mr. Uzo said.

For yet another constituent, Hon. Somto is an all-around leader. “He is a man with a heart of gold; a leader that listens to his people. His gate is always open. For me, what he is doing is beyond politics, said Anthony Onwuegbunam, from Mputu in Ogbaru.

The occasion which became a sort of scorecard presentation by the legislator, and also a town hall meeting joined together, was well attended by hundreds of Ogbaru people and Hon. Somto took the chance to give stewardship of his representation in the last legislative year. “I want to thank you again for the confidence you reposed in me. You voted for me in 2019 to return to House of Assembly to continue with the work you sent me”, Hon. Udeze said in his address. He also observed that a first-term legislator is grossly limited in the things he can do and attract his constituents. “If you are a first-timer in the legislature, you are a learner. But once you are able to return, then, you can be able to do a whole lot for your people”, he said.

Speaking on some of his achievements during the legislative year, Hon. Somto mentioned the motions he has moved in the floor of Anambra State House of Assembly calling on the executive governor’s attention to the conditions of various Ogbaru roads.

“Basically, as a legislator, what we do is lawmaking, and then using the instrumentality of lawmaking to engage the government to work for the people. So many roads in Ogbaru which Ogbaru people are demanding for their construction, I have championed through motions.”

A good road is critical for farmers to be able to move their produce from interiors to townships where buyers converge for business.  Ogbaru is reputed for farming and because of the peculiarity of the area; farmers often plant twice in a year which before now was not recognized for necessary government attention. However, efforts by Hon. Somto helped to formalize two planting seasons of May-June, and November-December, in Anambra’s planting season.

On education, aside from the numerous motions among others, Hon. Somto reminded his constituents that he has tens of people in his scholarship scheme which has been running for years now. He also informed them that he has built teachers’ quarters at Ogwuanocha, in Ogbaru, to encourage teaching and learning. Speaking on his motivation, Hon. Somto remarked that “life is too fleeting and so I believe in sharing. I don’t do these things so that I will be praised, No”.

As for the fast-approaching Anambra gubernatorial contest, Hon. Somto Udeze elected in 2019 on the platform of the PDP has maintained his stand that he is in support of PDP’s candidate, Valentine Ozigbo whom he spoke so glowingly about and encouraged his constituents to support for a greater Anambra state. He also expressed confidence that Val Ozigbo would win the November 6 governorship election in Anambra state.

Seven MDAs to Appear Before Senate Over Buhari’s N5.1trn Loan