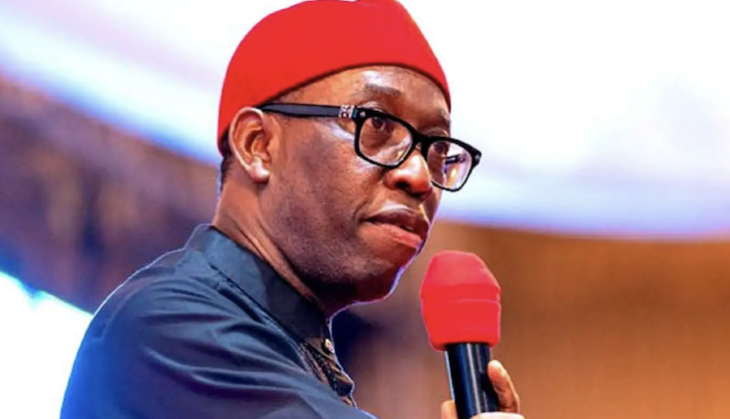 Addressing members of the Board of Trustees (BoT) at the party headquarters in Abuja, Atiku said he decided to pick the Delta Governor among those recommended because he “personifies not only the seriousness the current moment represents for our country but also the future that our young people yearn for and deserve.”

Reacting shortly after Atiku unveiled Okowa as his running mate, supporters of Rivers State Governor, Nyesom Wike, who described the Delta State governor as a featherweight politician, expressed anger over the decision, warning that the decision would have adverse implications for the main opposition party in the 2023 elections.

The Southern and Middle Belt Leaders’ Forum (SMBLF) also fumed at the decision, describing the acceptance by the Governor to be the running mate to Atiku in next year’s election as a betrayal of the South.

The Forum recalled that the 17 Governors of the Southern States of Nigeria in both the PDP and the All Progressives Congress (APC), under the Chairmanship of the Governor of Ondo State, Rotimi Akeredolu, met in Asaba, the capital of Delta State on May 11, 2021, and took far-reaching decisions, including that, based on the principles of fairness, equity and justice, the presidency should rotate to the south, at the end of the statutory eight years of President Muhammadu Buhari’s tenure.

It pointed out that Okowa was the host of that historic meeting, which was followed by another meeting of the group in Lagos, on July 5, where they reaffirmed their decision, and again in Enugu, on September 16, to restate the call that the presidency should rotate to the south in 2023.

“Governor Okowa has, by his action, betrayed the trust reposed on him by his colleagues; the southern governors, the entire good people of southern Nigeria and all well-meaning Nigerians. He has made himself persona non grata, not only, with SMBLF but all citizens who treasure our oneness and yearn for a more united and peaceful Nigeria,” the statement read.

“We, therefore, reject Governor Ifeanyi Okowa and his Vice Presidency, and leave him to his lot, but let the world know that this is a betrayal of the highest order.

“And that this is not a matter of loyalty to one’s political party, but rather a greedy, parochial and unpatriotic action, committed against the general interest of his State, Delta state, the Niger Delta region, and Southern Nigeria. It is, certainly, also not in the interest of the nation at large.”

In an interview with Arise News on The Morning Show on Saturday, the PDP Vice Presidential candidate dismissed the criticisms, saying he does not only represent the South-East, but also represents the South-South regions of the country.

The Delta State governor, who has been described by the PDP presidential candidate, Abubakar Atiku as a bridge between the South and North, said: “For me, yes I’m from Delta State. I’m definitely an Igbo man. There’s no doubt about that. I’m from Delta State in the South-South, but if you’re looking at the Igbos across the country, I’m an Igbo man, I can’t be counted out and that is the true situation.”