On March 29, President Mohammed Buhari ordered the cessation of movement in Abuja, Lagos and Ogun state to contain the spread of Covid-19.

With the figures from International financial and monetary organizations that show Nigeria as the world poverty capital, one can conclude that  Nigeria cannot stand the test of the lockdown as the country’s economy faces headwinds from the deepening oil price.

In less than a week, other states felt the necessity as Ogun state Governor Gbeoyegba Oyetola did not hesitate to lock down the country for about 31 days after an increase in the number of confirmed cases.

In this The West African Pilot News Special Report, Beloved John chronicles the bitter experience of families who were flat broke and lives from hand to mouth, never knowing where the next meal would come from.

Caroline Oloyo never expected the lockdown to exceed the 14 days initially announced by the state government. Her frustration heightened when she heard that the lockdown had been extended as there was no more food in her store.

“My heart raced really fast when I heard the news. I didn’t know how I and the rest of my family would survive. We had exhausted all our food items and there was no money. The most disturbing was my debt,” she said

It was not too difficult to notice the agony in her voice. Caroline is a widow and a single mother of four. She lost her husband to a ghastly motor accident just a few years back. Before the order was imposed, she had been nurturing her children from her small scale Garri business.

“Feeding my children to their satisfaction became extremely difficult. Before the pandemic, I made as much as possible every day from my little Garri business but my business halted just as the lockdown directive became effective. I tried reaching some cassava suppliers but it was to no avail. All major cassava stored was closed. Even farms became inaccessible.

“I started washing nylons for market women when things became extremely tight. I visited these women as often as I can to make money. On my lucky days, I earn as much as N500 but that was on rare occasions,” she added. 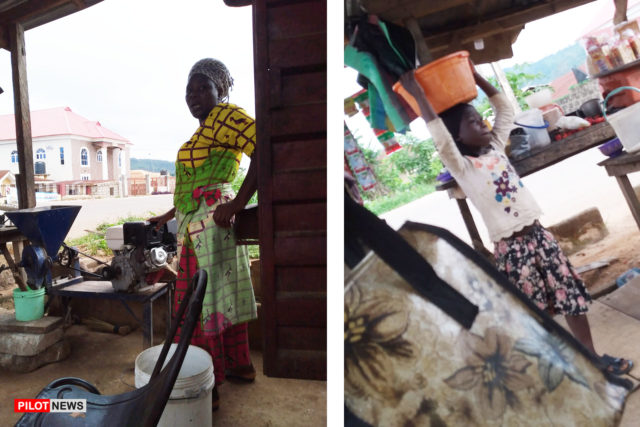 The Lockdown and social distancing measures adopted to contain the spread of the virus dried up the incomes and resources of many, intensifying the anxiety of not having enough to survive. According to the World Bank, the order increased the potential risk of food insecurity in Nigeria by disrupting the food supply chain and stressing people’s ability to access nutritious and affordable food.

Data from the National Bureau of Statistics show that 82.9 million Nigerians lived below its poverty line of N137,430 ($381.75) per year. This figure represents 40.09% of the country’s total population, excluding Borno which has been ravaged by Boko Haram insurgents.

The lockdown has not only dealt with Caroline, but the sad experience of Titilope Yusuf and her jobless husband is also pitiable

Titilope was a petty trader who had used all the pittance saved to restock her stall just before the lockdown was enforced.

“We watched our food items reduce day by day until the store was empty. Our savings too were gone but the numbers kept rising so they had to extend the lockdown. First, our store dried up, my shop followed and then our savings finished.

This is one experience I will always remember. No one was allowed to work even when feeding became a hectic task. You know, my son fell sick during that period. We couldn’t afford to take him to the hospital or buy him drugs. That was a luxury we couldn’t afford so, we relied on herbs. I wasn’t sure about the nature of his sickness was but I gave him the herbs I prepared any way,” Titilope said.

The sudden hike in the prices of food items and other basic items necessitated food rationing for the family.

As weeks went by with the order still in place, Akinyemi, Titilope’s husband feared that his family might have nothing left if the lockdown lasted any longer.

“Coronavirus has brought hunger to our family, leaving us with the prospect of facing abject poverty,” he said with a face as long as a fiddle.

The Economic Commission for Africa (ECA) in a new report noted that with each day the pandemic lasted, the impact on the continent’s struggling economies will get dire.  Already, the growth rate is expected to slow down from 3.2 percent to 1.8 percent amid the pandemic; millions of people will be pushed into extreme poverty.

The rise of the infectious disease alongside the uncertainty of food and access to resources compelled Akinyemi into subsistent agriculture. He believes that farming might be the only way to save his family from starvation.

“In my house, there was no room for extravagant feeding. There is a portion of the food everyone was allowed to eat.  There is no money, the cost of food items is too high, we couldn’t work and we must eat. My children understood that the economy is very harsh at the moment so no one eats more than they are allowed.  I decided to pay more attention to my farmland when the lockdown was extended. With the hope that it might help if the lockdown lasts longer than anyone expected,” he added.

Although Governor Gboyega Oyetola had ordered the payment of stipends alongside the distribution of stimulus packages to vulnerable persons in early April, these residents have denied receiving any stimulus package.

She had been expectant when she initially heard the news but lost interest after waiting for weeks without seeing any palliative.

“Most people have nothing to eat, our homes are empty. Many have spent all that they have on food and so, it is understandable that they are still expectant. The news raised our hopes high but in the end, we got nothing. I didn’t get, neither do I know of anyone who did.

“Staying indoor would have been less difficult if we were given the stimulus as promised.  We had no food, no money, and no job.

“Robbery was becoming rampant and everyone was struggling to survive. That wouldn’t have been the case if palliatives were distributed as promised,” she said.

Oloyo once sighted a passer-by carrying palliative items but doubts that the stimulus had been deployed adequately. She believed the lockdown had left her in a dire situation, and despite been classified as vulnerable she never received any package.

“I heard about the palliatives weeks ago, but up till this moment, I haven’t received anything.  Last week, I went with my friend to the location the relief committee was rumored to have been distributing the packages but we didn’t see anything. The palliative was distributed in some areas while other areas were neglected,” she said.

When contacted, the Senior Special Assistant (SSA) for strategic communication to the Osun state governor, Charles Adeyemi disclosed that limited resources have made the distribution of enough palliatives nearly impossible.

“I think it is not fair to conclude that the government hasn’t done anything. Palliatives have been distributed and even Ilesha has been covered but unfortunately, it is not everybody that this thing will get to. There is no way it can go round over two million people.

“The last time, the state government distributed over 6,000 bags of rice.  But that cannot round over two million households.

Let us be frank, this is not about political correctness. We have millions of people to cater for and our resources are limited.”

He also urged “rich” citizens and “people of goodwill” in Osun to support the effort of the government by giving food items to the poor.

“We encourage our citizens also to do citizen-to-citizen assistance and support the effort of the government in helping the vulnerable cope. That’s the only way the palliative can go round,” he added.

An expert of sorts, Mr. Seyi Kolawole acknowledged that the lockdown has influenced the masses negatively but noted that the move was necessary as the lives and health of citizens were at stake.

“The lockdown has grounded to a halt, the Nigerian economy. The economy was already on the ropes when oil prices crashed, with other services brought to a stop as a result of the lockdown, the economy pretty much came to a standstill.

“The impact of the lockdown has influenced the populace negatively although the lockdown has been necessary. But we have witnessed increased crime and brutality from law enforcers.  The health and lives of Nigerians are at stake and so also is the health of the economy. It’s a difficult balancing act between the two, he said.