Henry Okolie-Aboh AKA Igiligi is not a new face in today’s business world. In the global economic scheme, the name pops out from every project segment relevant to oil, gas, and energy. He is the Managing Director/Chief Executive officer of Westfield Energy Resources Limited who started from the bottom up, to become one of top guns in the global oil and gas service sector.

This day, however, Okolie-Aboh is did not wake up in preparation for business meetings, neither was he in the position to walk around with a speakerphone addressing conferences. September 6 has always been a different day ripped-off of any official engagement. It is his birthday.

Okolie-Aboh likes to work. He knew his calling –entrepreneurship and would always want to explore new opportunities. For instance, when he graduated from the University of Jos in 1993 and after his National Youth Service Corps, he soon discovered after working with Banks and major mainstream companies, that working for establishments was not an option for his prospects. He discovered his passion for business content creation and entrepreneurship and without any ambiguous thoughts followed that path. 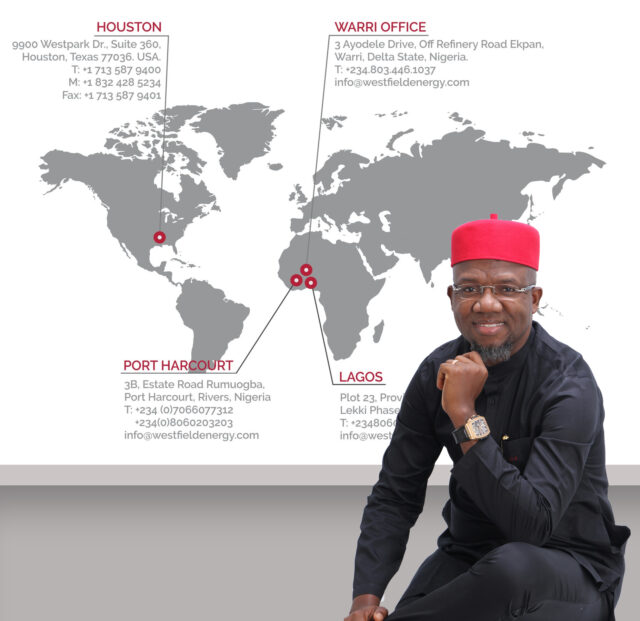 Henry has since remained an astute businessman and his acumen had led to the development and implementation of differentiated growth strategies in companies that he helped facilitate, including Transcore Geoscience Limited, Westfield Energy Resources Limited, Westfield Subsea Limited, and Spice Records.

Ordinarily, birthday celebration of himself may not have been accorded any such priority, but for people around him, he deserves that moment –a time of reflection of his existence with God who made it possible and of course, a special time with family and friends. This year has been consistent with that tradition for even the COVID-19 social-distancing lifestyle did not stop the celebration of this icon.

While his family celebrated him at home, friends and acquaintances gathered remotely to “zoom” a celebration that felt like real-life. “It was his 50th birthday, so there is no way we could let that slide by” said Professor Chris Ulasi, Houston-resident, and an Executive-Director at WAP.  “Igiligi has been one of us here –an easy-going person who even at this young age, works round-the-clock; helps a lot of people and the community; grew a business empire from the scratch, touching lives of people, entities and nations. I am not surprised that thousands all over the globe checked in to acknowledge his special birthday moment,” Dr. Ulasi said.

Okolie-Aboh started his career at Ordrec Investments Limited in 1996. He later worked as a relationship manager with FSB International Bank Plc and Guaranty Trust Bank Plc. At FSB, he worked as a team leader in ENSEC- the specialized Energy division of the bank where he managed the accounts of first-class oil service companies. At ENSEC, Henry worked at the Onne Oil and Gas Free Zone acquiring a wealth of experience in Free Zone operations, Project Management, and supply chain management.

In 2005, he pioneered his flagship company Westfield Energy Resources Limited which has experienced very impressive growth and has become a household name in the Upstream Oil & Gas Industry in Nigeria. The company which is actively involved in Engineering, Oil & Gas equipment Procurement, Construction, and Installation has offices in key energy centers around the world such as Houston- USA, Lagos, Port Harcourt, and Warri.

Born in Uli, Anambra State on September 6th 1970,  he was educated at Federal Government College Maiduguri and graduated from the University of Jos in 1994 with a Bachelor of Science (BSc) in Mathematics.

He has extensive experience and knowledge of the Oil and Gas Industry in West Africa. He has attended various training programes/courses in Subsea Oil & Gas Exploitation and is currently attending the Executive Program- OPM (Onwer President Management) at the Prestigious Harvard Business School in Massachusetts, USA.

In 2011, he was appointed a Member of the Board of Trustees, Daniel Orjiako Memorial Foundation Inc., a foundation founded by Americans and Africans to respond to the needs of the underprivileged in sub-Saharan Africa which directly oversees programs designed to help individuals through education scholarships and healthcare education.

He was elected President General of Uli Progressive Union (UPU) in November 2012 and served meritoriously for 4 years. Henry is married to Adaora Okolie-Aboh, with two children,  Anuli and Kenenna.

We Will Bury Oshiomole Politically in this Election — Obaseki