These selfish morons trivialize the blood of their forebears that have constantly watered the tree of liberty.

An African proverb says that a man who is not mindful of how his father died is most likely to become  victim of the exact thing that killed his father. This expression holds true when we view in awe, the deliberate ignorance, and blind emotional path many of my African American brethren are taking. President Donald J Trump has neither displayed any act of love nor exhibited readiness to drive the course of uniting Americans as one indivisible nation geared for Greatness! 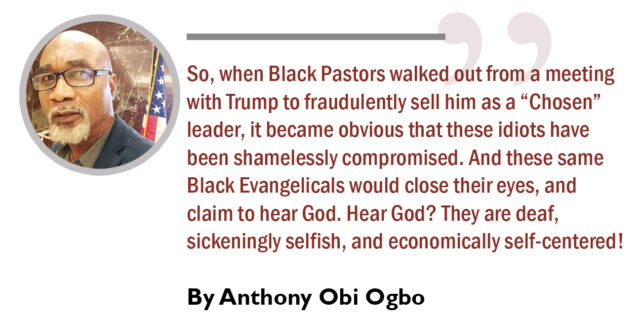 For the fact that this President arrogantly refuses to denounce white supremacy during a presidential debate —instead he told the Proud Boys to “stand back and stand by”—is enough for him to lose the support of the entire Black Community. Indeed, because the African-American Community has spent their entire origin fighting against racial discrimination and injustice in America, Trump’s obsession with the supremacists would have rendered him the worst enemy of the Black race.

That is not all. This President started lying even before he was sworn-in, exaggerated his economic gains for African Americans which he actually inherited from his predecessors. He fraudulently paraded inaccurate figures during his regime to substantiate his transformation of the Black Economy. Of course, there was a reduction in Black unemployment, but much of the progress came during the Obama Administration. Household median income also was higher for blacks before Trump took office. Please, Factcheck these statistics!

What is more? Donald Trump’s action is not just insulting to the entire Black race, but an abomination to the African ancestors for an established racist to sit among supposedly Black spiritual leaders, and avow that his Administration has done more for the Black Community than any other President since Abraham Lincoln!

So, when Black Pastors walked out from a meeting with Trump to fraudulently sell him as a “Chosen” leader, it became obvious that these idiots have been shamelessly compromised. And these same Black Evangelicals would close their eyes, and claim to hear God. Hear God? They are deaf, sickeningly selfish, and economically self-centered! Are you there?

In fact, the Greenville pastor, John Gray, came back to compare to his meeting Trump to Jesus. What a travesty of spirituality.

In fact, the Greenville pastor, John Gray, came back to compare to his meeting Trump to Jesus. What a travesty of spirituality. Most abominable! Today, a few Black celebrities have been on President Trump’s Campaign payroll, corroborating wicked conspiracy theories with Trump’s son-in-law Jared Kushner to woo Black voters. These selfish morons trivialize the blood of their forebears that have constantly watered the tree of liberty. Greed is keeping them blind!
Please note that there is nothing wrong with African-Americans exercising their rights to not only join any political party, but also to legitimately make their choices regarding policies and politics. However, how they make those choices matter.

Out of greed, selfishness, and ignorance, these stooges came up with a discreditable self-destructive Vote-Trump Campaign options that might pose devastating consequences to themselves, their communities, and their unborn generation.

The existence of Core Black conservative associations is not new, for even the Republican Party has for years sustained a substantial African-American membership base. However, we have a million reasons why Donald Trump, the incumbent President currently sweating a reelection battle, is considered dangerous — not just to the country, but also to people of color. And that is why this article is calling out the moronic options of “Blacks for Donald Trump” and all other African American entities who are blindly supporting Trump.

Whereas these idiots are out there spreading Trump’s conspiracy gospels, it must be noted that from Economy and Education — to criminal justice, the policies rolled out by this regime are not just hurting African Americans and other people of color, but also would persist for years in its ravaging influences if nothing is done to halt it. Evil conspiracies kill generations before they are born.

To Donald Trump Campaign spin-doctors, know that TRUTH and FACTS will always wipe off the most portent conspiracies to obliviousness! One day, we shall reflect on the events of season, and close it out with a Biblical phrase “And it Came to Pass…”!
I am not a prophet, but watch out for the self-damaging repercussions of your sightless choices!

♦ Professor Anthony Obi Ogbo, Ph.D. is on the Editorial Board of the West African Pilot News.