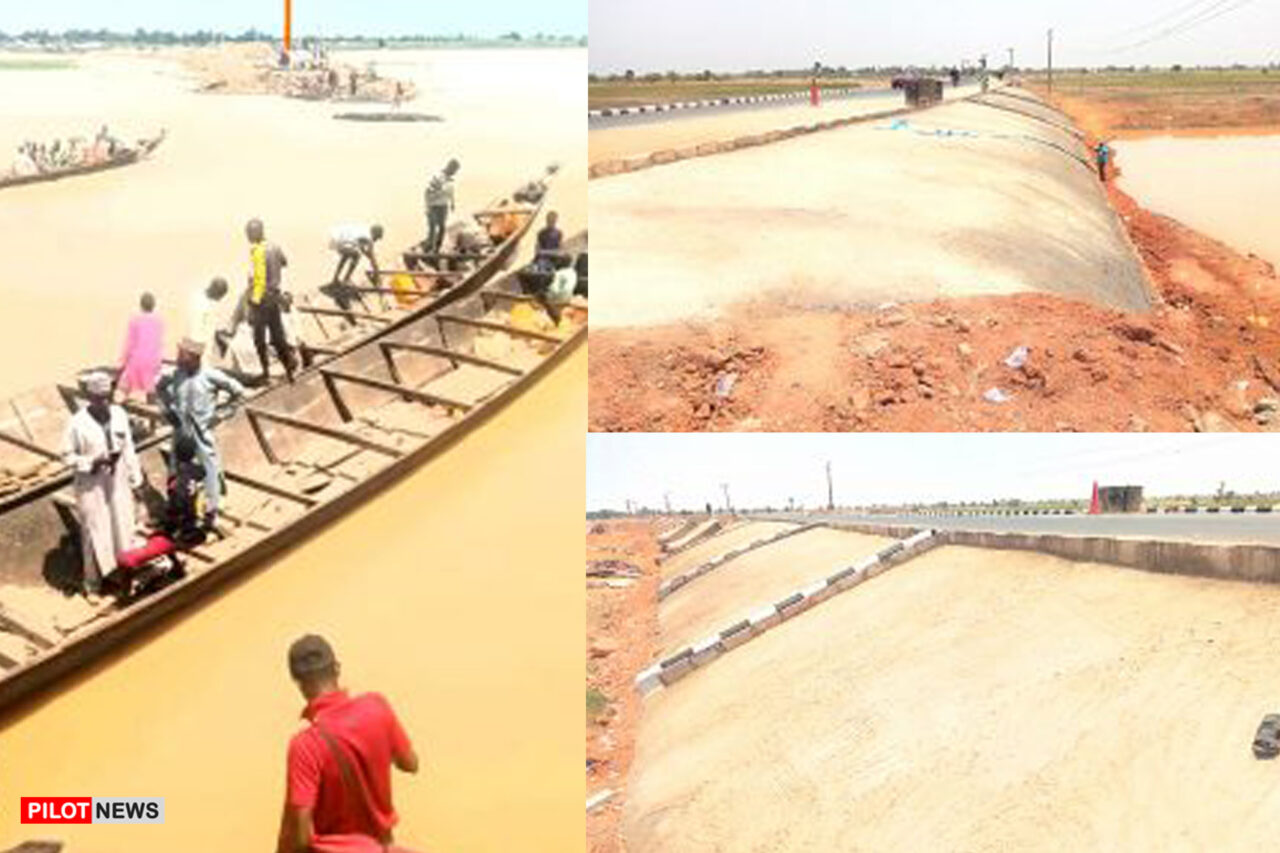 BAGUDO — Motorists and residents in Bagudo Local Government Area of Kebbi have commended the Federal Government for reconstructing the Tuga bridge that links Nigeria with Benin and Niger Republics.
The News Agency of Nigeria (NAN) reports that the Tuga bridge was washed away by flood in 2020, cutting off Bagudo LGA from the rest of the state.
Tuga bridge when it was washed away by the flood in 2020.
Malam Umar Muhammad, a driver, expressed relief over the restoration of the bridge, saying that motorists had faced untold hardship since the bridge was destroyed.
“When the bridge was destroyed by flood in 2020, we were thrown into confusion and hopelessness as it had affected link with our business partners in the state and those in Niger and Benin Republics.
“Many of us depend on the bridge to transport goods and passengers and fend for our families, so when it was cut off, our means of livelihood was cut off too.
“Three drivers who attempted to cross the river using makeshift bridge lost their lives,” Muhammad told NAN on Wednesday.
He commended the Federal Road Maintenance Agency (FERMA) for restoring the bridge.
Tuga bridge after it has been restored by FERMA
A resident of Tuga, Aliyu Muhammad, said that the collapse of the bridge had crippled social and economic activities in the area.
“Relationship with our brothers and sisters in communities on the other side of the bridge was severely affected, we thank FERMA and all those who contributed to ensuring the restoration of the bridge,” he said.
The Village Head of Tuga, Alhaji Muhammad Tuga, commended the agency for the quality work and expressed optimism that the economy of the area will bounce back.
“You all know that the road and bridge are our means of reaching our business partners and to some extent relatives in the two neighboring countries.
“The reconstruction of the bridge has raised our hopes that things will return to normal,” he said.
The village head advised motorists to drive safely and abide by traffic rules as they resume business in the area.
Also, the Chairman of Bagudo local government, Alhaji Muhammad Kaura, appreciated FERMA for completing the project on time.
Meanwhile, Rilwanu Usman, a FERMA engineer, said the 21 kilometre road served as a major economic route between Nigeria and the Republics of Niger and Benin.
He said that the Managing Director of the agency, Nuraddeen Rafindadi, facilitated the release of funds for the project in December 2020.
“Between January and February, we were able to restore the carriageway for, at least, motorists to access to Tuga for onward journey to neighboring countries,” he said.
He added that the three culverts were later constructed within the river space in order to enhance the water passage and protect the embankment against future floods.
“We reinforced it with concrete retaining wall of about 300 meters in length to protect the embankment; we have been able to restore the carriageway to its original standard,” Usman said.
He commended Gov. Atiku Bagudu for his support and constant monitoring of the project.
Rafindadi added that National Assembly members from the area and chairman of the local council also supported FERMA immensely.