“No amount of Plan B will ensure the safety of two-thirds and half of Nigeria’s population. ” ―Ebuka Onyekwelu

Earlier this week, Pastor Paul Adefarasin, the senior pastor of House on the Rock Church while preaching to his congregation, advised them to get a “Plan B”, because, given the rate at which Nigeria is descending into chaos and disorder, it is necessary for the face of the reality before us, for everyone to have another plan, aside from Nigeria. “Get yourself a Plan B. Whether that’s an Okada to Cameroon or a flying boat to Seme Border. A hole in the ground, a bunker as we call it. Just get yourself a Plan B. Because, these people are crazy; …The whole bunch of them. And watch the signs because it can happen, just like this (snaps fingers)”, Pastor Paul Adefarasin said. Ever since this message got to public knowledge, it has been subjected to severe interrogation, and in fact, the Pastor has been abused by many who questioned his faith. 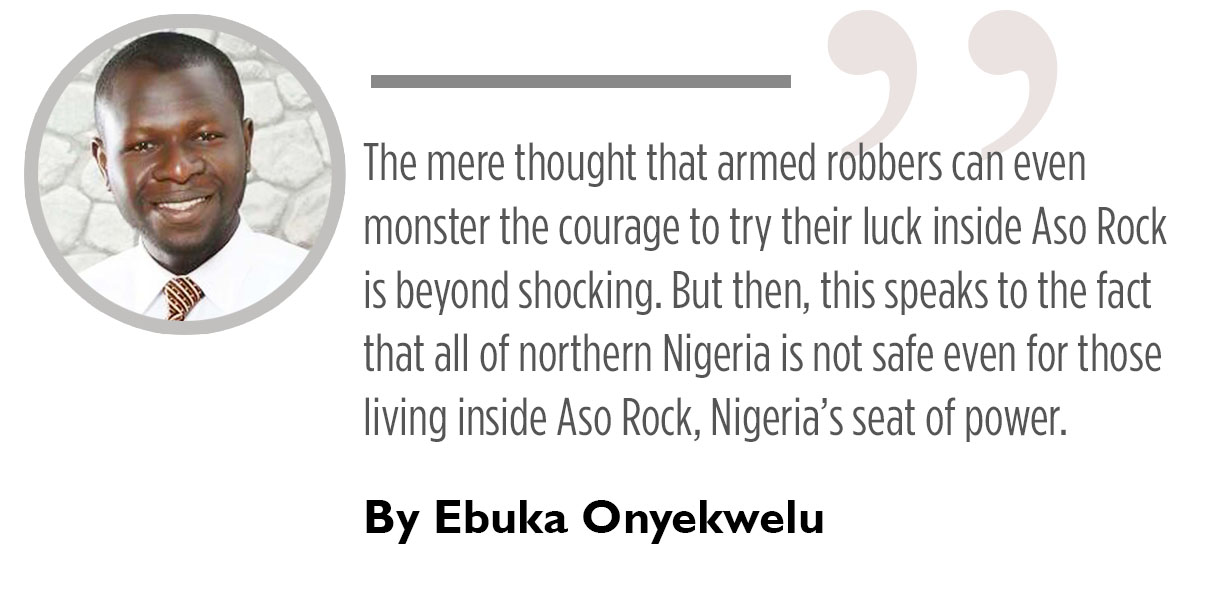 The reality in Nigeria today, however, suggests that in fact, the admonition by Pastor Paul is a matter of commonsense. A few months ago when the security of Nigeria started to deteriorate, amidst increased weakness of the security apparatuses, the choice of government attitude to the developing dangerous trend as it then was, was telling to the effect that one can easily say that it was only going to get worse. Today, it has indeed gotten worse.

There is no section of the country that is safe for anyone. In the northern parts of the country, the tripartite challenge of banditry, terrorism, and Fulani herdsmen militia have combined to make northern Nigeria’s case a most terrible one. The situation is dire such that the governor of Niger state has to publicly admit that Boko Haram is almost overrunning the state. Even Aso Villa is not safe for its inhabitants, as yesterday, there was a report of armed robbery inside Aso Rock, which the President’s spokesman later described as only a “foolish attempt”.

In the last two months, no single day passes without news of people killed or kidnapped by gunmen, bandits, or herdsmen

However, the mere thought that armed robbers can even monster the courage to try their luck inside Aso Rock is beyond shocking. But then, this speaks to the fact that all of northern Nigeria is not safe even for those living inside Aso Rock, Nigeria’s seat of power. In the last two months, no single day passes without news of people killed or kidnapped by gunmen, bandits, or herdsmen. It has become a daily routine much so that it appears it no longer matters. The tripartite challenge of gunmen, kidnappers, and Fulani herdsmen militia has made many roads in southern Nigeria a significant threat to the users.

Only yesterday, the southwest security outfit, Amotekun, arrested about four kidnappers in Ondo state and declared a manhunt for about fifty others. In the south-south region, Benin has virtually transformed into a den of kidnappers. The situation in Rivers state is no different, forcing the governor to declare a dusk to dawn curfew. In the southeast, the scourge known as unknown gunmen has continued to fester, since its first strike a few months ago. Many more police officers have been killed. Several police stations have been set ablaze. Only two days ago, the vigilante office in Ozubulu, Ekwusigo Local Government Area of Anambra state was attacked by gunmen and about five people were killed.

In Awka, the capital of Anambra state, the entire road is deserted before 8 pm.

As of today, the situation in Nigeria is chaotic and desperately dangerous. In cities around the southeast, it is hard to still find people on the road late evenings. In Awka, the capital of Anambra state, the entire road is deserted before 8 pm. So very clearly, it is presumable that at least most people acknowledge that the times are strange. In perspective, the admonition to get a Plan B, only but appears natural because it is borne out of the desire for self-preservation. This is key in all human endeavors. What Pastor Paul said was merely an echo of what thousands of Nigerians would have done or are doing.

Matter of fact, there is hardly any politician in Nigeria down to the State House of Assembly, without a valid visa to a functional Western country, especially the US, UK, and Canada. Hundreds of Nigerian political elites are permanent residents in Europe or America. Hundreds of them are also citizens of European or North American countries. Most of Nigeria’s elites have homes in Europe or America, and they also have kids who are citizens of those well-governed and organized countries. By this, one can conclude that by the estimation of Nigeria’s ruling elites, Nigeria is a danger waiting to happen, so they set out with not only a Plan B but with many other alternatives.

And to achieve this, many times, they have to mindlessly steal monies meant for public infrastructure and the public good, for their selfish end. The only difference now is that the call for a Plan B was made by an elite pastor, right from the pulpit of his Church. In truth, a Plan B does not appear novel or in the least strange to those who can afford it. But does having a Plan B solve the problem?

The magnitude of crisis hovering over Nigeria is better only imagined and should better remain a figment of that imagination. No amount of Plan B will ensure the safety of two-thirds and half of Nigeria’s population. In fact, with the level of poverty and deprivation, only a handful of Nigerians can afford a formidable exit from Nigeria in the face of an intense breakdown of order. What this means is that even those who can afford it will be leaving families, friends, and millions of others behind. A complete breakdown of order as it is will put multiple tens of millions of Nigerians into a more dangerous situation.

Right now, the security apparatuses have been weakened and nearly overwhelmed. The sequence of this event is that next, the government will no longer be able to exercise its authority or enforce anything. The consequence will not be war, but the enthronement of anarchy where armed groups will conveniently oversee public affairs according to their whims and caprices. And that is only the beginning of what lies ahead. On a broader view, while having a Plan B matters, but it is only to the extent that one can afford it for himself and perhaps, immediate family.

This still leaves millions of people endangered with the possibility of being faced with extreme conditions, danger, and trepidation that can be comparable to the state of nature. Given the level of hunger and deprivation in Nigeria today, wide chaos will breed extreme misery and anguish to millions of people who are limited in their choices of a sustainable Plan B. Even those living in border towns to other African countries will be faced with severe challenges of navigating forests infested by bandits that even now, have cordoned off much of Nigeria’s forests.

The situation in Nigeria today cannot be resolved with an escape plan.

Therefore, while a Plan B may be permissible or important, and  has been dutifully implemented silently by those who could afford it, it does not dispel or cancel out the enormity of the danger waiting to unfold if the Nigerian government does not rise and begin to do things differently. Having a Plan B cannot change much of what precarious situation over one hundred and fifty million Nigerians will be facing if the insecurity challenge is left to fester and take firm root.  A Plan B can hardly be afforded by almost all Nigerians, and cannot provide a viable solution to the current insecurity challenge. It might even get worse to the extent that many of those with an artful exit plan may not be able to implement it, as they may be killed before the time they intend to exit. In the final analysis, the situation in Nigeria today cannot be resolved with an escape plan. Both the government and the citizens must be united in this task, while the government leads the charge now that they still can.