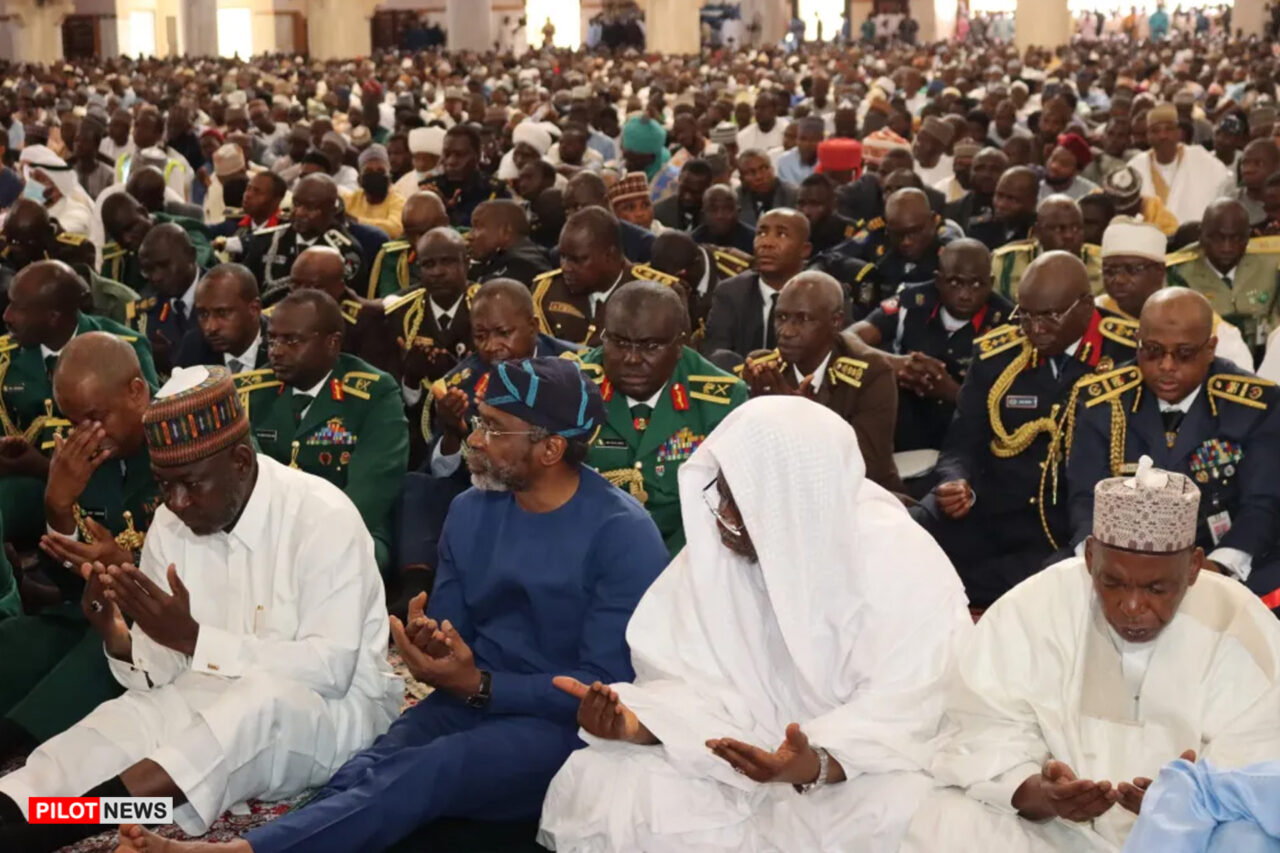 As part of activities marking Nigeria’s 62nd Independence Day, thousands of Muslims converged on the Abuja National Mosque on Friday and offered a special Jummah prayer for peace and sustainable development of the country.

Prof Shehu Galadanci, who led the Muslim faithful to a two Raka’at congregational Jummah prayer, prayed to God to guide the country’s leaders in making decisions that would affect the lives of many Nigerians positively.

He also prayed for the country to overcome some of the challenges in the areas of insecurity, corruption, and the economy.

Galadanci also stressed the need for Nigerians to always show gratitude to Allah for his bounties, blessings, and favors to Nigeria as a nation.

The Senate President, Ahmad Lawan; the Etsu Nupe, Alhaji Yahaya Abubakar; the Minister of the Federal Capital Territory, Muhammad Bello joined other worshipers to pray for peace, economic sustainability, and for the nations to overcome its various challenges.

The President of the Nigerian Supreme Council for Islamic Affairs and the Sultan of Sokoto, Alhaji Saad Abubakar said Nigerians irrespective of their religion and ethnicity must return to God and see themselves as one for a better society.

At the 62nd Independence anniversary lecture held at the national mosque, in Abuja, President Muhammadu Buhari reaffirmed the commitment of his administration to enhance the quality of life of all Nigerians.

Represented by the President of the Senate, Ahmed Lawal, President Buhari urged public office holders to focus on providing dividends of democracy and not to be distracted by the ongoing political activities in the country.

The Guest lecturer, Prof Ahmed Dogarawa, in a lecture, entitled, “Shura the Islamic corrections for True Democracy’’, urged leaders to always use consultation as a means of resolving conflict.

Mr. Boss Mustapha, Secretary to the Government of the Federation (SGF), applauded the efforts of the various security agencies in the fight against insecurity and urged them to sustain the tempo to achieve a free and fair election in 2023.

Also, the Wife of the President, Mrs. Aisha Buhari, acknowledged that though there were challenges facing the country, stressed the administration’s efforts to surmount them.

The event was attended by the speaker of the House of Representatives, Femi Gbajabiamila, the Minister of information and culture, Alhaji Lai Mohammed, representatives of Service Chiefs, top government officials as well as diplomatic corp.