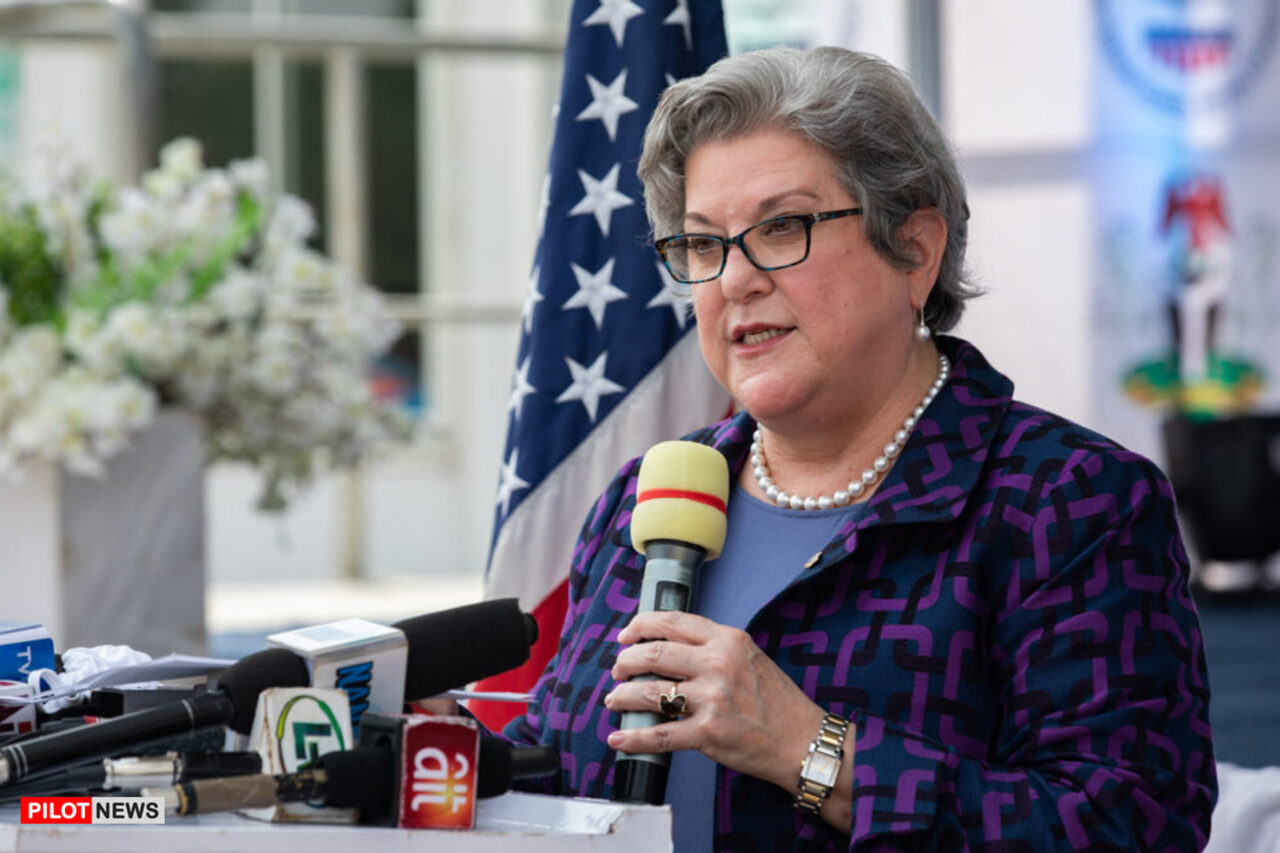 LAGOS — The United States of America, Ambassador to Nigeria, Mary Beth Leonard, has urged the Nigerian media to leverage their right to press freedom by countering propaganda and disinformation through regular and impartial fact-checking.

Leonard, while speaking on Thursday in Lagos during a Town Hall Meeting hosted by the Nigerian Guild of Editors, said that a team approach was needed to help improve public trust in the media.

“One of the challenges that democracies around the world are faced with is an “unfortunate, pervasive lack of trust in the media.”

“Financial inducement of journalists corrodes the institutional position of the media as what we refer to as the Fourth Estate or one of our pillars of democracy.

“Patronage politics, corruption, inequality, and the failure of many democratic governments to deliver for their citizens fuel public and media doubts about the democratic model, causing them to lose hope and accept the status quo as normal,” she said.

The US Envoy also said that access to accurate, unbiased information was critical to democracy.

“When you uncover stories that others have tried to hide or deny, inevitably prosecutions follow, and accountability is attained through the voice of the people at the ballot box,” Leonard said.

According to her, most vicious trolls on the internet are shielded by anonymity and called for media literacy as part of the school curriculum.

“It ensures that citizens make responsible, informed choices rather than acting out of ignorance or misinformation.

“Information that is publicly accessible to all ensures that elected representatives uphold their oaths of office and carry out the wishes of those who elected them.”

“Nigerian media should ensure that citizen voices were heard and this, in turn, might help reverse voter apathy.

“Too often Nigerian elections are personality-based and lose focus on critical issues such as unemployment, inflation, and lack of health care,” she said, maintaining that the media could hold the candidates accountable for discussing issues.

She said that media coverage of elections could encourage more turnout if all outlets focus on the issues that affected the daily lives of constituents.

The US envoy urged the media to pay attention not just to the problems of the society, but also to possible solutions.

The Ambassador said that the US recently created a new Bureau of Cyberspace and Digital Policy to fight back against disinformation, stand up for internet freedom and reduce the misuse of surveillance technology.

“Too often, technology is being used to silence dissent and prosecute citizens – and democracies must answer the call to fight back against disinformation, stand up for internet freedom, reduce the misuse of surveillance technology, and establish standards of responsible conduct in cyberspace.

“Democracy works at its best where there is a multiplicity of voices from broad segments of society which represent every race, gender and ethnicity addressing a plethora of issues from access to opportunity, health, and prosperity,” Leonard said.

The Guest Speaker and Human Rights lawyer, Femi Falana (SAN), said that Nigerian Editors had failed to ask pertinent questions while addressing topical issues that affected democracy in the country.

“Nigerian journalists should strengthen their disciplinary bodies in order to fish out and punish those who were bringing the profession into disrepute.

“An assault on democracy can occur anywhere in the world and the political elite play a major role in the institutional degeneration,” he said.

Mustapha Isah, President of the NGE, said one of the major roles of the media was agenda-setting, adding that the more stories the media did on a particular subject, the more importantance the audience would attach to it.

According to him, what is currently dominating headlines in the media on the 2023 general elections is zoning or power rotation.

“This is the agenda of the politicians.

“As the politicians talk about zoning, the media should remind them that citizens are more interested in the issues of development, education, insecurity, youth unemployment and poverty ravaging the nation.

“The media as a watchdog of society owes it as a duty to monitor governance and hold public office holders accountable to the people who elected them,” Isah said.

The capacity-building fora was discussing and sharing best practices with international experts on topics including journalistic standards, identifying bias, and conducting fact-based investigative reporting to better inform the Nigerian public.

Neglect of the boy-child ―Social Implications of the female empowerment