Okoro was so proud of how diverse his wife, Jane, was, in that she could converse with people from different cultural backgrounds and fields of career. The night had fallen and they were in bed about to have some pre-sleep romantic moment.

Okoro looked Jane in the eye and said with a well of desire;

“Honey, I love your electric personality.”

Jane blinked and replied; “I appreciate your mention of my personality as eclectic.”

In a bid to detail his appreciation, he recalled; “You know, when my friend, Chike, told me he would be coming today, I didn’t know what we would be talking about because he can’t have a conversation without bringing up a topic in math. The moment he brought up the menstruation topic, I was pacified–

“Darling, you were pacified abi you were petrified?” Jane interrupted trying to understand.

“Pacified, petrified, I ma nkem nekwu. You know the one I’m talking about. I was frightened.” Okoro withdrew.

“So, I was saying that when he started talking about menstruation,”-

“-I was afraid but was later happy you were able to keep the conversation going for almost an hour. It was a big relief for me. At that moment I thanked God for giving me a brilliant wife like you.

“You mentioned something about parameter during the conversation.”

“Please, can you expatriate just a little so that I can have one or two to contribute next time?”

Jane, trying so hard not to turn the romantic moment into a lecture, said; “All right. Let me expatiate-”.

“Before that,” Okoro interrupted, “have you noticed that the new salesgirl, erm…, what’s her name again?

“Ehen. Mariam. Have you notice she comes very early to the shop?”

“Exactly. Her punctuation is really condemnable and if she continues that way, I will reward her soon.”

Before the end of Okoro’s statement, Jane was already rolling her eyes. 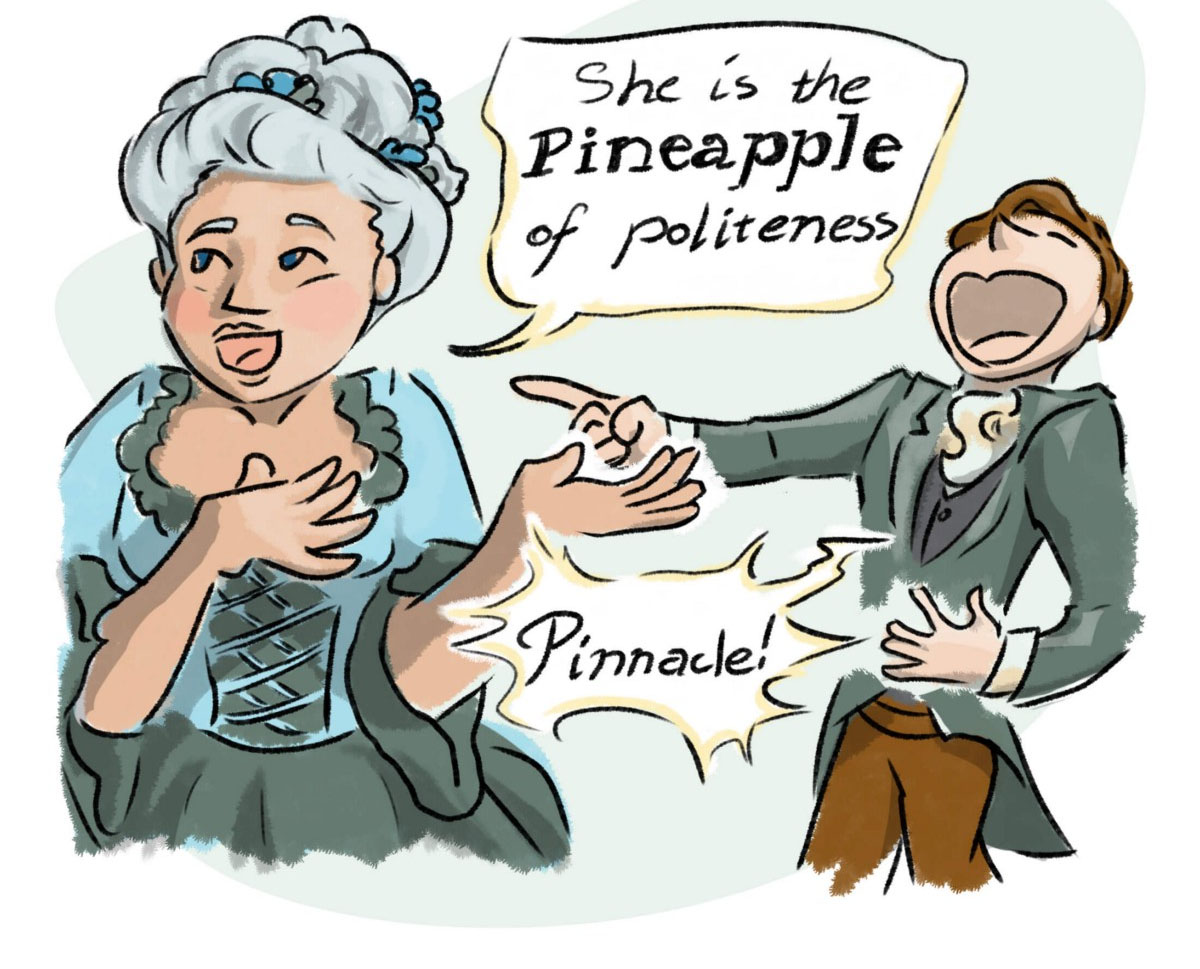 “You know,” Okoro continued, “when you suggested her to me, I was not conceptive to the idea.”

“Honey,” Jane could not overlook any further, “you were not receptive to the idea. And please, it is Mariam’s punctuality, not punctuation that is commendable, not condemnable.”

“Come,” he resumed, “when you conquered me to a corner at the shop yesterday afternoon, just to correct my English in the middle of my conversation with a customer, I suspected you had an interior motive. You were actually trying to make it obvious that I stopped schooling at elementary six.”

“Hey, Nna m, I have never had such a motive. Okay, look at now, you said I conquered you to a corner instead of cornered. You just said I had an interior motive instead of ulterior. Ogini kwanu? What is it? Instead, be speaking Igbo. I can do the interpretation.”

“I don’t blame you. When you were adopted eight years ago, was it English that brought you out? Oho ego m settle ifenine? Was it not my money that settled everything?”

“Daddy, Obughi iwu na iga su oyibo. It’s not a must you speak English. I was abducted, not adopted.”

Okoro stood angrily from the bed, whispering under his breath; “Let me go and take my meditation before it becomes too late.”

“Your medication you mean?

“Woman, stop lecturing me. As long as you understand what I’m saying, don’t interrupt me.” Okoro lashed.

“Eweniwe, dim oma, Don’t be angry, my good husband. I’m just concerned that you might be confusing our clients and they may have low perception of you.”

“THANKS. But keep your advertisement to yourself.”

Okoro completes his storming out of the bed.

“Daddy, please, get me my Nivea cream when coming, o.

After some minutes, he returned to the bed and mumbled as he settled in to sleep; “I did not see your Nineveh cream.”

Stunned Jane closed her opened mouth and remarked; “No, you should have brought Nazareth since you did not see Nineveh.” She rolled her eyes.

Okoro’s malapropisms seem to have turned his intended romantic moment with his wife sour.

Malapropism is usually, the unintentional misuse or distortion of a word or phrase, similar in sound to the intended word but amusingly wrong in the context. It can also be called malaprop, acryrologia, or dogberryism. The word Malaprop was coined from the French phrase “Mal à propos” which literally means “ill to purpose.”

Just like Okoro, Mrs. Malaprop, a character in a play titled THE RIVALS by Richard Sheridan, is prominent for her humorous misuse of words in context. Some of her popular malapropisms are her use of ‘pineapple’ for ‘pinnacle’ (“He is the very pineapple of politeness”), ‘illiterate’ for ‘obliterate’ (“…illiterate him quite from your memory”), and her use of ‘dissolve’ for ‘resolve’ (“he will dissolve my mystery”).

This is not to say that every mistake in speech is a malaprop. Instances like moaning a name different from one’s immediate pleasure partner is simply a slip of the tongue although, it could cause a hurricane afterwards. Saying, “The lecture was moved to tomorrow so, I will be in school today” (instead of tomorrow) is also a slip of the tongue. The question now becomes “when can a misuse word be classified as a malaprop?”

For malapropism to occur, the substituting word must i) have a different meaning from the intended word, ii) have a similar sound to the original word, and iii) be recognized in the language used.

Malapropisms are considered an error in speech, however, it could also be used as a device for comic effect.