Preparations for the elections have begun since 2021 when the Senate passed the Electoral Amendment Bill on the 9th of November, 2021. One of the clamour of the youth that was amplified following the 2020 ENDSARS protest was the demand for young people to be given a chance in government to make a difference.

Mr. Sanni Alausa Issa, a writer and personal development enthusiast, focused on helping young people achieve short and long term personal development goals has a keen interest in Nigeria’s history, human nature, behavioural science, emotional intelligence and good governance. He is the communication lead for Brain Builders Youth Development Initiative and Head of Research and New Media at Diamond FM Ilorin.  He spoke extensively with WAP’s Staff Writer, Favour Ebubechukwu on the necessary actions required for the youth to take in order to achieve the country of their dream.

Starting off with the subject of power, he said;

“Nobody leaves power. You take power from them. And to take power from them, you have to be part of the system that gives people power. As young people, we must first recognize that to fix the system, we must first be part of the system. INEC, for example, estimated that they want to register twenty (20) million new voters by July, 2022. As at the last time I checked, there were just about 12% of that number.

“Young people have the numbers. In 2023, I think the closet we can do is to massively register for our voters cards not just as a means of identification, but also to have a good percentage of young people (80 percent and above) actively involved in the electoral process, voting. The older generation still vote and we might not agree with their idea of leadership but the only way to change that is to be involved.”

Speaking of the time frame required to see the change the youths clamour for, he predicted;

“One thing we must acknowledge too as young people is that we cannot get instant result. You don’t think that because we were angry in 2020, our anger would translate to changes in 2023. No.

“If we want to initiate the process of change, it may take us five election cycles. And when I say five election cycles, that is about two decades- Four years each (20 years); meaning that by the time we get results, the young people of today would no longer be young people. But you want to set a template and a system that allows the next generation to follow through.

So, let’s start by increasing the number of registered voters. By 2023, we should have the highest number of voters Nigeria has ever recorded and it should be populated by young people. That’s one.

“Two. We should have more young people involved in partisan politics. You cannot be neutral throughout and expect things to change. You have to be involved. And when I say you have to be involved, it does not necessarily have to be running for a political office. No. We have to be there to ensure that we make right decisions. We need to examine candidates based on the values that we hold- being able to ask questions like: why are we going for this candidate?” Being able to persuade members of the party to support or not to support a candidate based on what would work for us.”

Mr, Sanni spoke further about the need to act as opposed to solely social media ideas; the need to pay attention to other offices that exist in government and the need to support young people running for office.

“You see, all of those ideas that we share on social media will remain on social media because we have not started taking the actions we need to take. Let’s take this back to our various constituencies. How many of us know our local government chairman? How many of us know House of Representative members? We don’t know the Reps. We do not know the Senate members. We do not know all of that. Our attention is just on the presidency: ‘oh, the federal government is not doing their job’. No. We have to go back. Get involved at that constituent level so that by the time you begin to initiate the ideas and influence people at that level, the changes might seem small but at least, it would be progress. 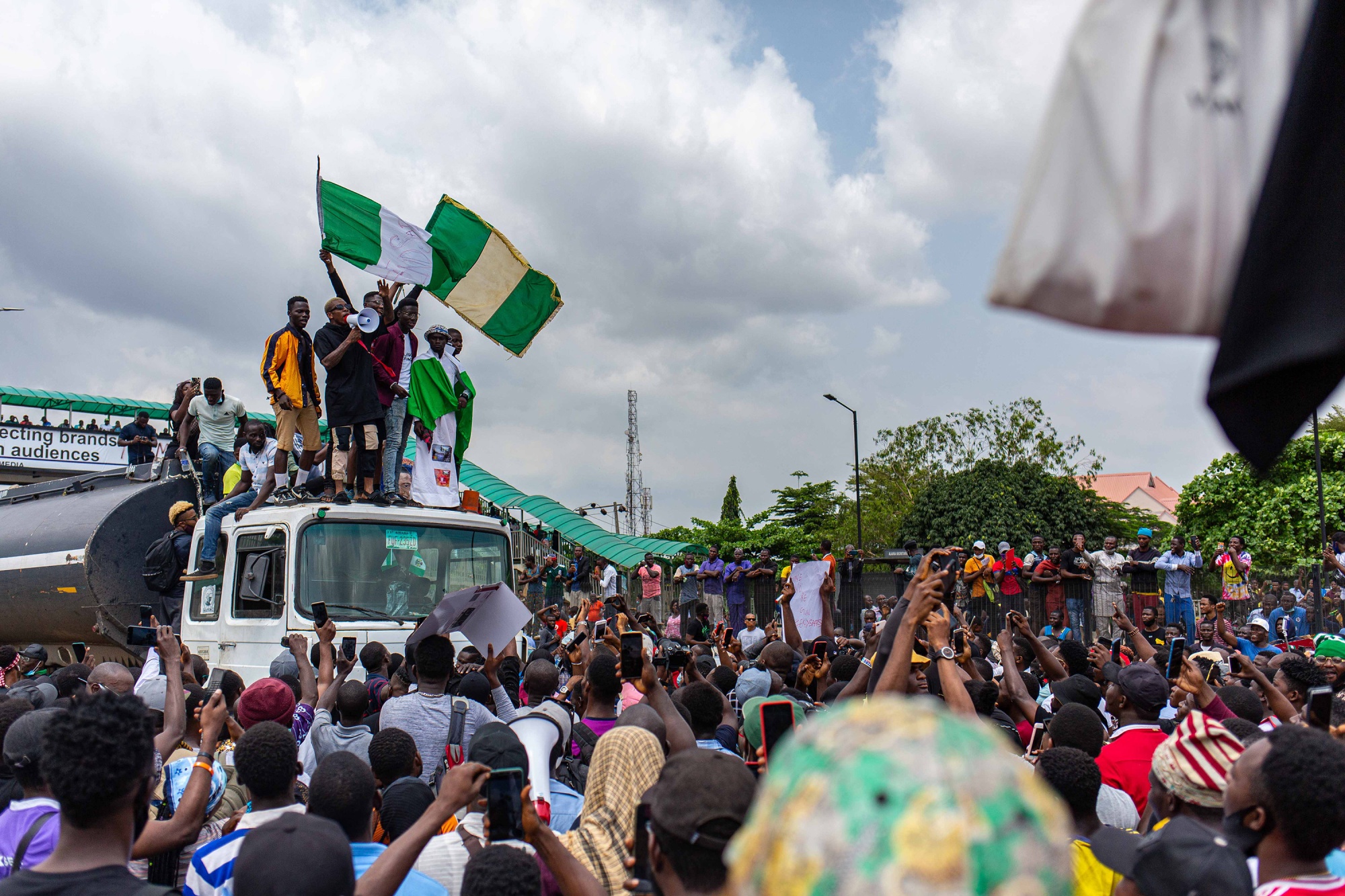 “We have this believe that the one at the very top can change things alone and that is not true. That is why we are so much concentrated on the presidency, but if we look at some of the issues we are discussing that involves legislation, it is the kind of reps that we send into the House of the Assembly that determine the kind of legislation that they would make. If we want to review the constitution or restructure Nigeria, it has to go through the Senate. Therefore, we need to take that part seriously too. Ask them questions. Determine whether this person would share the values that you want them to hold- values of developing community.”

“Another thing is that we need to support young people. I see a lot of people disregard and condemn young people that join the two most popular ruling party: APC and PDP, saying ‘why would you join the old cargos.’ No. I don’t buy into that.

“Let them go there. We need young people in those parties to breathe that fresh air into the system and we need to support them.

“Sometimes, I think Nigerians are confused. We don’t know what we want. You say that young people that has joined these major parties have “betrayed” us because they are going to join the old parties. Now, when you find other people in the lesser known party, the third force as we call them, you still say ‘oh they cannot win against the major parties’. So, what exactly do you want?

I think as young people, we need that clarity of what would work.

“I’m also sick and tired of people highlighting the problem. Everyone now knows what the problems are but we hardly speak up the solution and how to get the solution to work.

“For me, talking should end; actions should follow. Support candidates whether they are a major party or a smaller party. If your vote does not count, politicians would not try to buy them in the first place. Support candidates of your choice. Understand that in democracy, people have the right to have their own choice. You may not agree with those choices but it is their right. That is the benefit of democracy. So, if someone is propagating an idea you do not like, it’s a matter of persuasion. There’s too much of ‘US versus THEM. If you don’t agree with me then we cannot be on the same page’. No.

Politicians align where their interest align.

There is a reason why you find one politician in party A today and tomorrow, they are in party B. As young people, we need to get the positive lessons out of that system and use it as a leverage to improve the status quo.”

Speaking of the need for the youth to acquire historical knowledge, he said

“There is a saying that if you don’t know what killed your father, the same might as well kill you or you might end up worshipping the person who did.

That’s where history comes in. History tells you the origin of the problem but the ignorance in young people these days is really startling.

“Recently, I saw a lady on Twitter that commented on the Vice President’s tweet and she regarded him as a Governor. And you wonder, ‘the Vice president of your country; you don’t even know that he is the Vice president of Nigeria? You think he is a governor? How can such a person make good choices in matters electing leaders?’ So you wonder: how much commitment does young people have in the system? We do not usually see ourselves as part of the solution. To be educated, you must first show interest.

“During the ENDSARS protest, I heard a lot of people saying that our parents did not speak up; our parents did not protest and I had to correct them. Our parents did protest. Before they decided that God would help them, they did make efforts. And I cited some historical examples under the military regimes where people came out to protest. They didn’t have the privilege of social media that we have now. Their coordination, their organisation was physical. They had to go hungry for days contrary to the ENDSARS protest where we had mobilisation and people provided with food and all that.

If we understood what our parents had done, we would ask: ‘Why did it not work? What were the issues? How did the government treat them?’ If we had done this, maybe we would have got much more out of the ENDSARS protest.

In conclusion, he said;

“Nigeria is in a mess. We do not like the current state of our affairs. We want things to get better but beyond that, let’s understand that one if the beauties of democracy is that it is participatory. So, let’s get involved in whatever way we can. Let’s persuade people to register for their voter’s card and vote.

To our government, it is unfortunate that the same set of people from generation to generation brought us to where we are today. I don’t know if they would have a change of heart, that is why I have nothing much to say to them. My focus is on the young people who can get them out of power and I hope that we get that done. If not now, then we set the ball rolling from now.”

Malapropism: “No, You Should Have Brought Nazareth Since You Did Not See Nineveh”