Igbos forgot that it was Haiti, not Israel that stood by them, took them in, fed them throughout the three years of a failed war to sustain the Biafran nationhood.

I recall in 2010 when the then Anambra State Governor, Peter Obi, led a Nigerian delegation, comprising the Red Cross, the private sector, the entertainment industry representatives to evaluate the level of damage by the 7.2 earthquakes that devastated Haiti. Governor Obi did not stop there, he continued with a campaign to generate funds to rebuild Haiti. And, Governor Obi was not being just philanthropic, he was actually exercising a duty to his ‘ancestral brethren’. 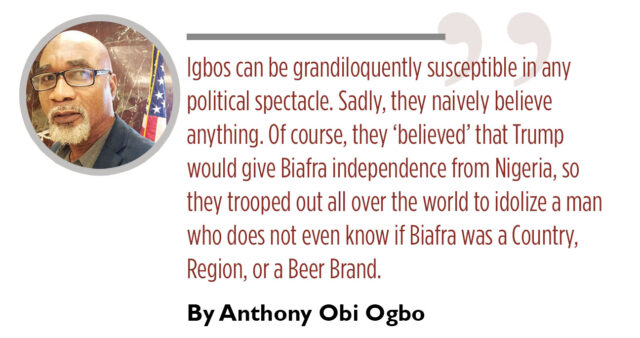 If there is any country or people that consistently stood by Biafra during the three-year Nigeria’s civil war, it is Haiti. From the conception of Nigeria, this Nation has watched out for the oppressed people of Eastern Nigeria and invested enormously to her political and economic resurgence. For instance, in his infamous letter to the British Prime Minister, March 22, 1969, in recognition of Biafra’s sovereignty, Dr. Francois Duvalier, President of the Republic of Haiti (1957 -1971) wrote:

“A left-over of colonialism which worked relentlessly at destroying the structures of Negro-African civilizations and demarcating boundaries with her own interests  as the sole criterion; Federal Nigeria has never since her independence shown the distinctive mark of a united nation. It has been impossible for her to silence tribal rivalries – to achieve the mixture of ethnic and cultures likely  to secure national unity.”

It is a fact that Haiti, joined by other countries like Gabon, Ivory Coast, Tanzania, and Zambia were the crucial backbones for moving the Biafra ‘Republic’ forward. Other nations, which did not give official recognition but provided support and assistance to Biafra included France, Spain, Portugal, Norway, Rhodesia, South Africa, and Vatican City. When indeed hunger hit this new nation and children were dying like roaches, some non-state actors, including Joint Church Aid, Holy Ghost Fathers of Ireland, and, Caritas International, and the U.S. Catholic Relief Services also waded in with substantial aids.

Historical Documentary records reveal that Haiti had many Igbo slaves – a fall out from the transatlantic slave trade.

It is pertinent to note that Haiti did not just take an active part in the aforementioned humanitarian support, but also holds an ancestral bond with the Igbos.  Historical Documentary records reveal that Haiti had many Igbo slaves – a fall out from the transatlantic slave trade. According to Paul Lovejoy, author of Identity in the Shadow of Slavery, similarities in Creole languages and the Igbo language are indications both groups shared the same ethnic identity.  Furthermore, the first king of independent Haiti was a former slave of Igbo descent. Henri Christophe, as history revealed, is revered as a hero among the Haitians and many within the African diaspora today.

From the foregoing background, it is understandable why many were appalled when some Igbo groups trooped the streets before the 2020 United States’ Elections to drum support for Donald Trump who is considered Haiti’s greatest nightmare since the 2010 earthquake that killed more than 316,000 people in Haiti. Different Igbo groups, including Churches, Biafran activist groups, and community leaders voiced unwavering support for Trump. These groups did this without any consideration of how Trump’s tyrannical policies had devastated Haiti. In fact, a large group that demonstrated in Onitsha wore white and blue outfits — waving Israeli flags, American flags, “Make America Great Again” placards, and images of President Trump.

In 2018, the Trump administration announced its decision to ban citizens from Haiti from receiving H2-A and H2-B visas.

Evidently, Trump’s administrative policies against Haiti demonstrated insensitivity and hate! For instance, on November 20, 2017, the Trump administration announced it would terminate the Temporary Protected Status (TPS) designation in 18 months for approximately 59,000 Haitians living in the United States. Two months later, on January 17, 2018, the same Trump administration announced its decision to ban citizens from Haiti from receiving H2-A and H2-B visas.

So why did the Trump Administration specifically target Haiti? It is clearly Trump’s racial ingenuity at work because in 2018, at a White House meeting, Trump demanded to know why he should accept immigrants from Haiti and African countries rather than Europeans. Trump repeatedly demanded, “Why do we need more Haitians?” in the immigration program. “Get them out.” He specifically called Haiti and other African countries “shithole,” and demanded fewer immigrants from “shithole countries” and more from places like Norway.

Joined by other countries and cultures, Haitians all over the world fought back with objections. A release by the Haitian Government read in part, “The Haitian Government condemns in the strongest terms these abhorrent and obnoxious remarks which, if proven, reflect a totally erroneous and racist view of the Haitian community and its contribution to the United States.”

Trump’s continued tommyrots kicked off a wave of criticism, with many observers pointing out this was another entry for the president’s history of racist and xenophobic remarks.  In a shocking revelation, however, the only group of citizens that applauded Trump in great numbers are Nigerians, especially those of Igbo extraction.

There were also other Trump’s policy rollbacks that proportionately hurt Haitians and other immigrants:

In my previous article titled, “Comedy of Nigerian Trumpsters”, I elucidated the course of political interests as a calculus based on policies, not emotions. The key problem with the majority of Nigerian voters, especially the Igbos is the inability to strategically assess political options that best serve their interests.  They follow any leader, vote for any politician, and worse still, align with any group without any well-articulated mission that would, in turn, serve their own needs.

Igbos can be grandiloquently susceptible in any political spectacle. Sadly, they naively believe anything. Of course, they ‘believed’ that Trump would give Biafra independence from Nigeria, so they trooped out all over the world to idolize a man who does not even know if Biafra was a country, region, or a beer brand. While they trooped the streets of Onitsha flying Israeli flags and waving Trump’s portrait, they forgot that it was Haiti, not Israel that stood by them, took them in, fed them throughout the three years of a failed war to sustain the Biafran nationhood.

They cry wolf about their ordeal in Nigeria, yet insensitive to the problems of other struggling nations – even a friendly one like Haiti!

With their impaired vision and lack of consideration to core issues of politics, Igbos missed on strategically positioning themselves for ‘deliverance’. By drumming support for a political fool, they displayed intellectual impoverishment, thus negating their quest for economic and political freedom. They cry wolf about their ordeal in Nigeria, yet insensitive to the problems of other struggling nations – even a brother-country like Haiti!

How could they make global news supporting Trump while calling on the international communities to deliver Nigeria from the shackles of President Buhari? How can they barefacedly attempt to eat their cakes, wash it down with spring water and still expect the cakes to be on the dining table?

For those floundering fools, let it be clear that one Donald J. Trump has gone down in history as Haiti’s WORST NIGHTMARE since the 2010 earthquake that killed almost 316,000 of her people. Hence, to make Donald Trump a demigod among the Igbos is an unkind betrayal of the Igbo-Haiti Bond and a disgrace to Igboland —the ancestral home of Haitians.

We must understand that when we forget our past, we miss the path to our future. Nd’igbo must search and weed their pathway to the PAST with a bid to connect their destination.

♦ Professor Anthony Obi Ogbo, Ph.D. is on the Editorial Board of the West African Pilot News