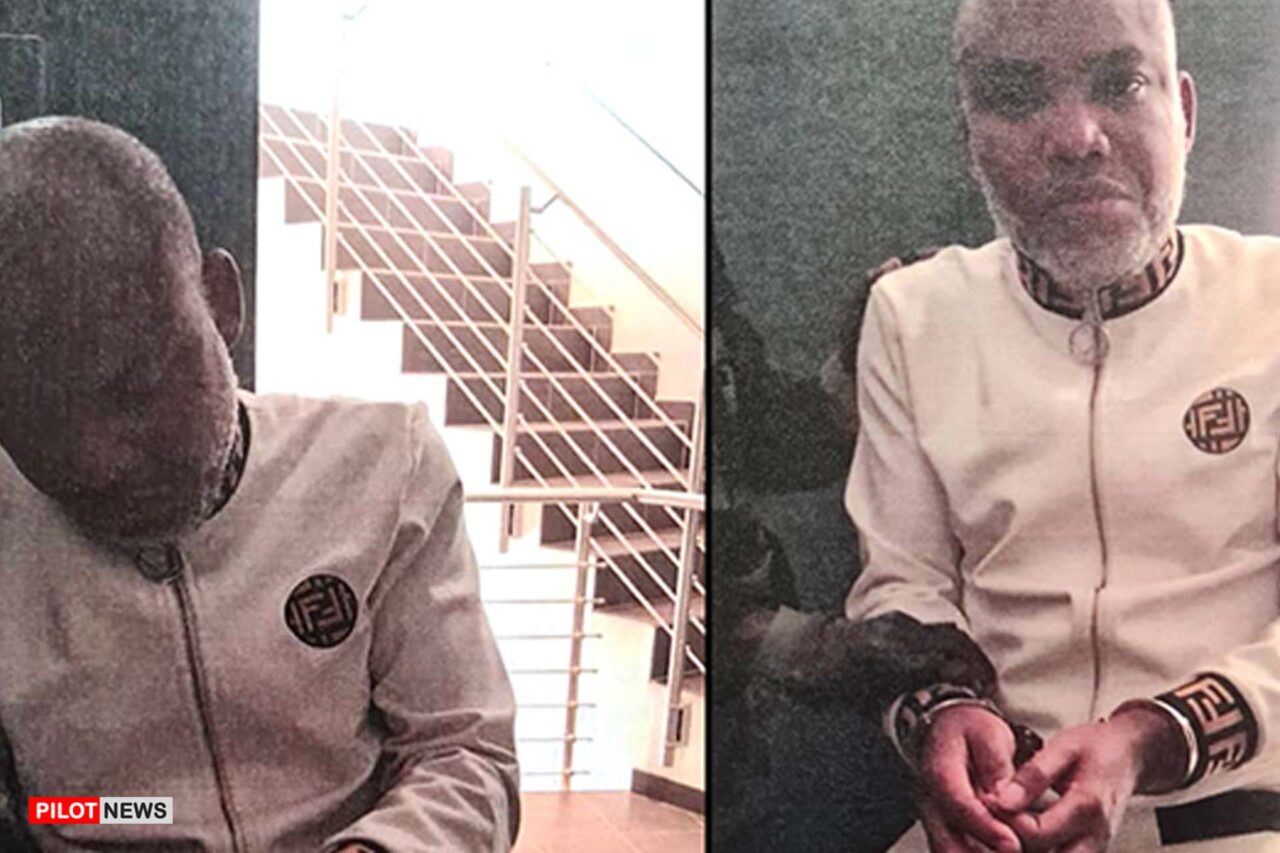 ABUJA — The Federal Government has accused Nnamdi Kanu, leader of the Indigenous People of Biafra, IPOB, of orchestrating the killing of 60 persons and the destruction of property in 55 violent attacks across the South East and South-South Zones within four months.

The News Agency of Nigeria reports that the Federal Government stated this in a letter dated April 26, 2021 to western diplomats.

In the letter, the Nigerian government detailed the atrocities allegedly committed by members of IPOB on the instruction of Kanu who was then in exile.

NAN also reports that one of the attachments to the letter listed the attacks on lives and property by IPOB in some parts of the country between January and April 2021.

Part of the letter read “In under four months this year, IPOB has carried out over fifty-five (55) violent acts in various parts of Southeast Nigeria killing scores of people and destroying many properties.

“Indeed it would seem that the position of the (western nation) seems to have further emboldened Nnamdi Kanu the self-confessed leader of IPOB.

”As recently as 22nd April 2021, broadcasting online from his base in London, Mr. Kanu has issued series of instructions to his militia and other members of the outlawed organisation, on acts of violence to be carried out within the territory of Nigeria,”.

The letter made copious references to some of the threats issued by Kanu thus: “Our madness has just begun.

”Every night, young men will not sleep, you will come out, at the starting of every road that leads to every populated area under human habitation to make sure that appropriate roadblocks are put in place to slow them down so we can catch them (Fulanis) and kill them.

”That is what we want you to do. Obiano (Governor of Anambra State) from today onwards, anywhere you are seen in public you will be attacked …. Obiano, … you are a dead man walking.

“Any landlord that gives accommodation or rents his house or her house to a Fulani person, to an army personnel, to somebody who works for the police or DSS.

“Kill them. If you see the army and the police in your place, kill all of them… Kill them.

“Any vehicle you see, from tonight (22nd April 2021), 12 midnight to 5, destroy it completely. That is the time they (referring to Fulanis) move about abducting people. And we keep quiet. … What stops you young people from, once you see them coming around 4am in the morning, you will block all every exits, set it on fire?

“They will exhaust all the ammunition that they have, then we capture them alive and cut off their heads. All of them. Decapitate them,” the Federal Government further quoted Kanu’s alleged instructions to IPOB members.”

With several Kanu’s broadcasts from Europe, there were concerns in official quarters that some western countries were justifying IPOB’s violent acts under the guise of the group’s pursuit of self-determination.

According to the “demarche” from the Nigerian Ministry of Foreign Affairs to some western countries, the Federal Government objected to a statement by an agency of a western nation whose government had noted and admitted that the creation of Eastern Security Network (ESN), based on its own understanding, was to combat insecurity.

The Federal Government, in its letter, however considered the statement (by the western nation) as ” justifying the establishment of a militia by a non-state actor and glossing over the destructive and violent acts of IPOB and the ESN.”

The Federal Government also noted that members of the outlawed organisation, in furtherance to these instructions, intensified their attacks on the specified targets.

According to the Federal Government, Kanu issues instructions from western capitals using Radio Biafra and members of the outlawed organisation carry them out in Nigeria.

“For example, a day after Governor Okezie Ikpeazu of Abia State has confirmed to newsmen that Nnamdi Kanu has ordered members of the group to kill him and other South-East Governors, which orders were repeated on Radio Biafra, the private residence of Imo State Governor, Hope Uzodimma, in his hometown in Omuma, Oru East Local Government Area of Imo State, was attacked and set ablaze and two of the security men attached to the house were killed,” the Federal Government said.

The letter then listed the IPOB attacks in the South East and South South Zones:

Akwa Ibom: 25 persons, including security personnel were killed in deliberate attacks on different locations across the state, between January 27 and April 19, 2021.

Cross River: Seven police officers were killed at Calabar-Ikom highway in Obubra and Yakur LGAs, on March 2, 2021, while a soldier was killed two days later on March 4 at a military checkpoint at Obubra Junction in Obubra LGA.

Enugu: Three policemen were killed in attacks on different locations across the state between February 28 and April 18.

Rivers: On April 17, 2021, IPOB operatives killed an NSCDC operative on guard duty at Shell crude oil manifold in Elelewon village in Obio/Akpor LGA and injured many others.

The Federal Government also told the western nation that its position may seem to have further emboldened Kanu, adding that this may explain the increased tempo of attacks carried out by members of his group.

Kanu, who jumped bail in 2017 and fled the country, was arrested and re-arraigned before Justice Binta Nyako of a Federal High Court in Abuja on Tuesday.