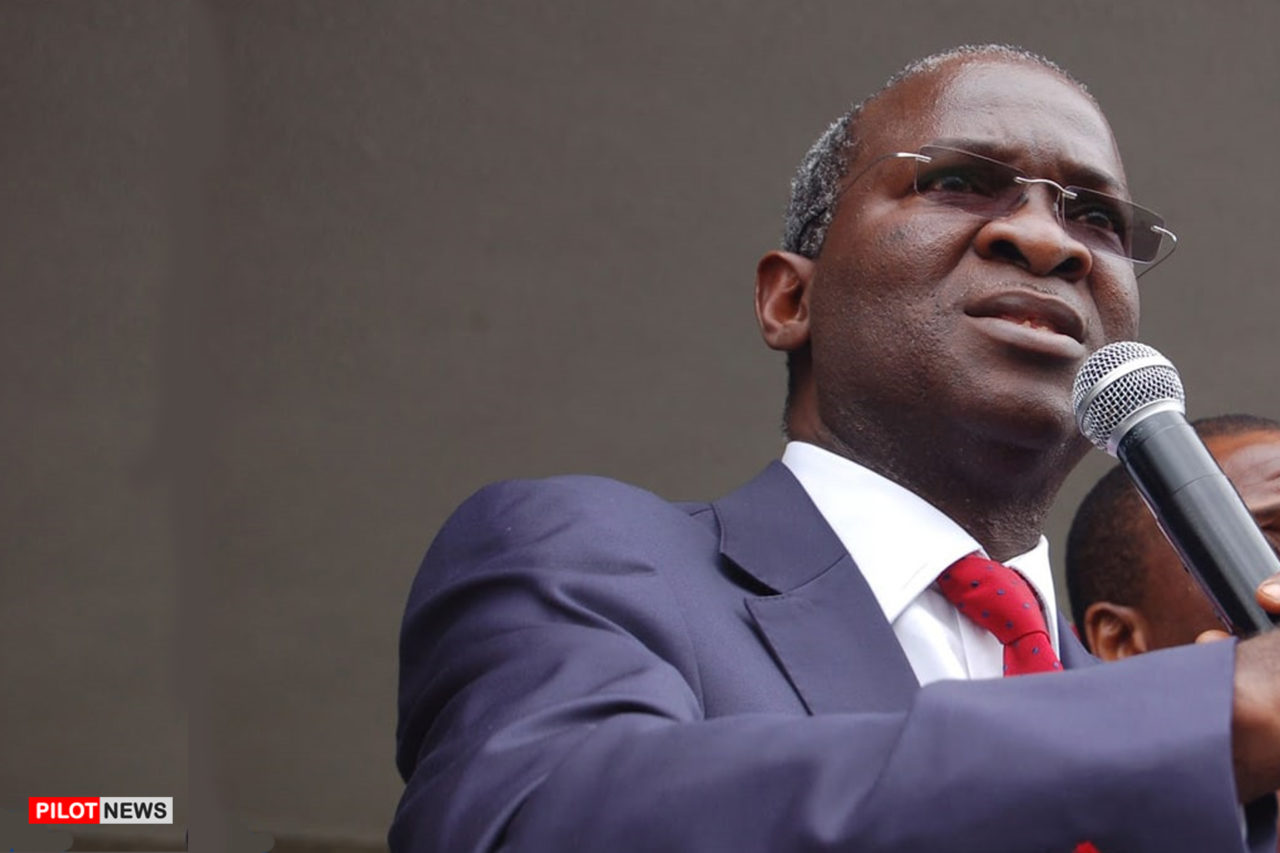 IKOM, (Cross Rivers) — Babatunde Fashola, the Minister of Works and Housing has called on people that want infrastructure to be ready to give up some land to pave way for the constructions.
Fashola said this at the inspection of the new 1.2km two-lane Ikom bridge which is to replace the old one-lane bridge built during the colonial era on Monday in Cross River.
Fashola said the objective of the Buhari administration was to expand, renew and upgrade the quality of Nigeria’s infrastructure whether it’s rail, airport, seaport, roads, or bridges.
He said the old bridge had a low head roof and for that reason some of the big cargoes, vessels, and trucks could not evacuate in Calabar.
“Some places  had been damaged on the head roof as a result of the impact by trucks, so this bridge solves that problem and so you will expect more  trade and shipment coming to Calabar now
“Because this is the A4 axis from Calabar to Maiduguri through Ogoja and its no accident that Cross River bears its name there is actually a river that names the state and that opens to the sea and to the Gulf of Guinea for high impact international trade.
“It is infrastructure consistent with the Buhari economic recovery and growth plan to increase trade and improve the ease of doing business.
“And for those who still have any doubt, the first bridge we went to is by an African development bank loan and this one we are standing on was largely funded by Sukuk.
“So you see what the government is doing with the money it has raised.”
Speaking about the Calabar-Itu road he said there were two contractors there, adding that the contractors were able and willing what was needed was cash.
“Our contractors have the experience but the real deal is the cash and also let me use this opportunity to say along that axis there are compensation issues by the communities.
“So those who want infrastructure must be ready to give some land, we are not taking your land away we are just asking for a right of way to pass.
“So when you start making compensation claims almost equal to the cost of construction where are we going to get the money from.
“The president has said that if you infrastructure you should be able to give up land and these lands belongs to the state and the communities.
“I want to appeal to the communities along Calabar- Itu allows us to pass, we will leave reasonable amount for the crops so we expect to see more cooperation along and this is the way forward,” Fashola said.
Explaining further on the projects executed by the government  Mr. Bassey Nsentip, Controller of Works for Cross Rivers said the  Calabar-Oban road was already commissioned.
“They are of two sections; Calabar to Oban is about 60km and it has already been awarded.
“And then between Oban and the Cameroon border Ekan because from Calabar to Ekan and the border is about 128km, so 60km has been awarded now.”
Speaking also at the inspection, Prof. Ben Ayade, Governor of Cross River appreciated all the effort the Federal Government was putting into building infrastructure in the state.
Ayade was represented by  Mr. Daniel Osimatsu, the Commissioner for Works in the state.
“We really appreciate the government, out of 11 section A projects in Cross river state this is the 7th and adding the other two makes it nine.
“To name a few Ikom Alesi road completed, Mge Ebiase road completed, Ebiase to Urugbane junction, the award of the Calabar East road to Julius Berger, and the TransAfrican highway.
“As we know road infrastructure facilitates communication, facilitates growth, and economy.
“We appreciate as a government because since the last six years of the government of President Muhamadu Buhari we have had unprecedented access and presence of these projects in Cross Rivers State,” Osimatsu said.
He added that the government would encourage them by ensuring that they make the environment conducive and provide whatever counterpart funds that they could anywhere they require it.
“Also we are talking to the locals to reduce the cost of compensation that is the duty of state government especially along that Calabar_Itu Road.
“We have handled that, the ministry of lands have handled that and reduced the cost on compensation that will ease construction,” Osimatsu said.