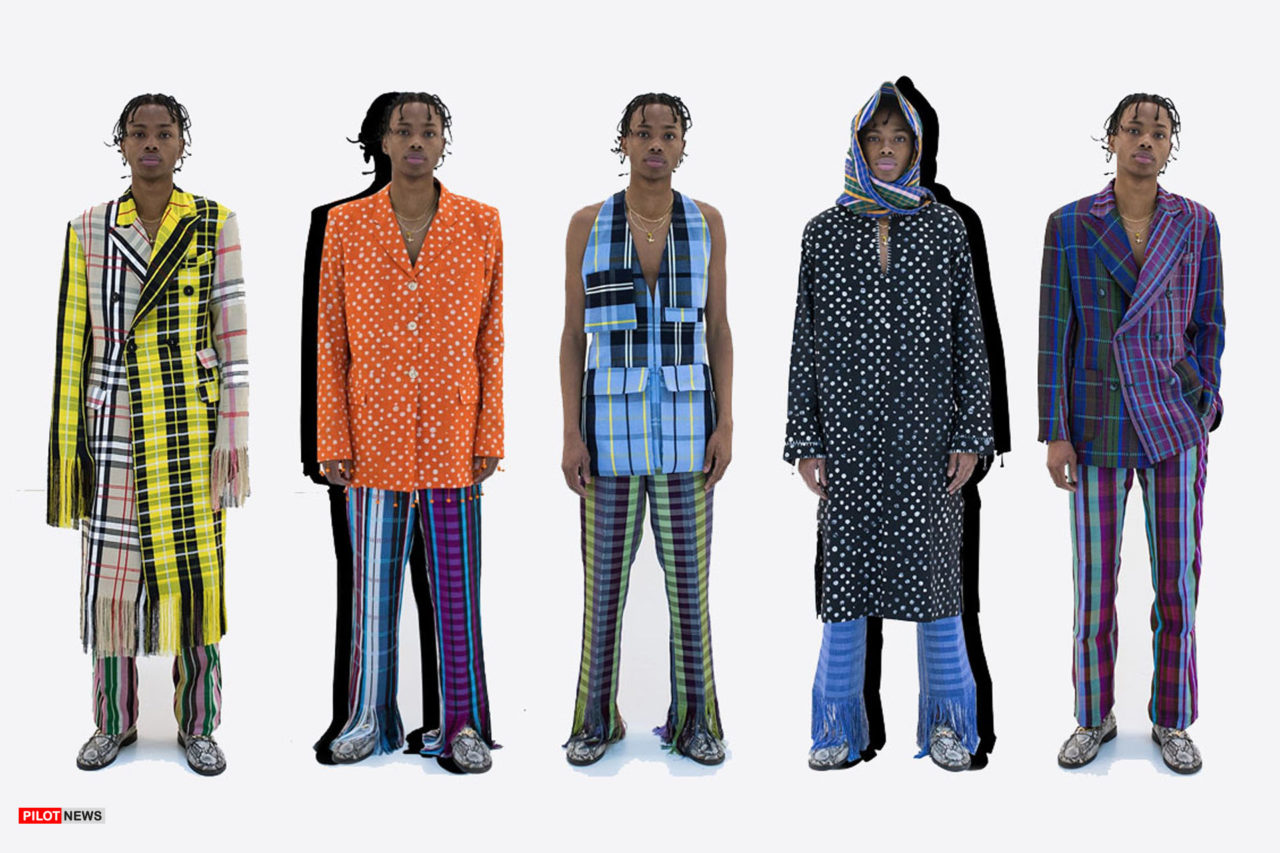 BY Kenya Hunt | Culled from Grazia

The air inside the Parisian restaurant Chez Flo is electric. In the middle of the room, Naomi Campbell holds court on a sprawling black leather banquette, while British designer Simone Rocha chats with a Vogue editor across the room. At every table in between, top models ( Pat Cleveland, Adesuwa Aighewi, Saskia De Brauw, Iris Law, Alton Mason and more), cult designers (Molly Goddard, Haider Ackermann, Telfar Clemens and Humberto Leon and Carol Lim ) and iconic image makers (Juergen Teller and Craig McDean) mix it up with very important fashion editors and retailers after a long day of runway shows. The mood is upbeat and jovial, giddy even, much like the man at the center of it all: the guest of honor, Kenneth Ize. ‘I still can’t believe this is happening,’ he says with a bright, sprawling smile that stretches across the entire width of his face. As he talks, alternating people slide their arms around his waist, shoulders and torso to give him all manner of congratulatory hugs, squeezes and air kisses. He’s had a very good year.

To the average person, Ize is an unknown. But to the fashion insider he is one of the industry’s brightest, most beloved new stars. Anna Wintour name-checked him in a recent video with Rihanna, while a panel of fashion titans from Louis Vuitton’s Nicolas Ghesquière to Dior’s Maria Grazia Chiuri selected him as a finalist for the LVMH Prize, which has become the fashion industry’s most prestigious Ones To Watch list. And career-making retailers, such as Browns Fashion, which hosted the Paris dinner, have committed to promoting his work. ‘When we laid eyes on his collection back in March we instantly knew it would resonate with our customer,’ says Ida Petersson, menswear and womenswear buying director of Browns where his line will launch this autumn. ‘He has an amazing talent for pattern cutting which, combined with the intricately woven fabrics he uses and his determination to work with artisans from his native Nigeria, makes the collection irresistible.

Ize’s standout tailoring appeals to women and men in equal measure. His collections are largely hand-made using an intricate, centuries-old technique. He sits at the cross-section of a handful of major shifts happening right now: the rise of African fashion from the fringes to the luxury world, an industry-wide awareness of fashion’s lack of diversity, the embrace of gender fluidity and the ever-pressing conversation around sustainability. Ize’s story speaks to all of these things and, asa result, to the future of luxury. The reality isn’t lost on him. ‘I want my work to create value around what we already have [in Africa.] My work raises the question, “What is luxury and who defines it?”’, he says over the phone from his studio in Vienna.

But a career in fashion wasn’t originally on the cards. ‘I’d see black models on TV but I never saw interviews with black designers. So I thought you couldn’t even get a job doing this.’ He decided to enrol in the University of Applied Arts, in Vienna, where he studied under Hussein Chalayan and Bernhard Willhelm, two men known for their innovative, experimental approach to design. But it was a New York internship with the label Edun, founded by Bono and Ali Hewson as a sustainable ready-to-wear line to promote trade with Africa, that inspired his decision to start his own label, and root it in NigeriaBorn in Lagos in the early Nineties, Ize grew up between Nigeria and Vienna in a household of fashion lovers. ‘Fashion was always a necessity. My parents loved clothes so much, they believed in the power of appearance. That made my brother and I have an interest in it. I remember my childhood through the clothes,’ he explains. ‘In Lagos, we have fabric stores on every corner. We go to occasions and dress up every day. And we make our clothes, bespoke pieces all the time.’

‘That’s when I knew I wanted to work with the community and bring this back [to Africa],’ he says of his decision to launch his business with an environmental and community-driven approach. ‘I’m pushing my identity and letting people know that the clothes are from somewhere. The people who made these clothes are from Africa.’ Specifically, they are a small group of weavers who make Aso Oke (in Yoruba it means ‘top cloth’), a traditional fabric worn on special occasions. The textile takes time and care to make; a single piece of outerwear, all in all, takes nearly two weeks to create.

‘A coat takes about six yards of fabric,’ he explains. ‘And one yard of fabric takes a day and a half to make. The market of weaving is growing the knowledge and at the same time pushing the craft.’ In the three years he’s been in business, Ize has introduced Aso Oke to not only a younger generation of Nigerians, attracting a wave of new artisans to the craft, but also a global audience of consumers. As demand for his clothing grows, he has the resources to hire and train more artisans in the art.

Meanwhile, the people who buy his clothes (he launched his eponymous label as a men’s line, but women now buy 70% of it, inspiring him to create one collection for both) get a uniquely timeless piece they won’t see on anyone else due to the simple fact that no two Aso Oke pieces are identical. That is the beauty of handcraft. That is also luxury, a concept that many only associated with the maisons of Paris and Italy. But a wave of activity has proven otherwise.

In the past five years, the organisers of Lagos Fashion Week, where Ize first launched his collection, have actively begun promoting its homegrown talent abroad, and wooing editors from Vogue, i-D, The New York Times, and more in the process. Meanwhile, Naomi Campbell, a champion of Ize’s work, has put Nigeria’s ARISE Fashion Week – another closely watched platform for African designers – on the global map. Earlier this year, Maria Grazia Chiuri staged her Dior cruise show in Morocco using the collection, which featured wax cloth made in partnership with artists from throughout the African diaspora, to make the point that luxury exists on the continent and is worth paying attention to. Months later, it was the young African designers, finalist Ize and South African winner Thebe Magugu, who generated some of the most buzz around the 2019 LVMH Prize.

To Ize, the idea of luxury is inextricably linked to sustainability and questions of supply chain. ‘Luxury isn’t something that should make someone less human. The people who are making these products, do they understand the product they are making? That’s how craftmanship should go and those are the questions we should be asking. That’s what I want to achieve.’ He hopes to influence the way clothes are viewed and solidify Africa as a destination for high fashion. ‘I want these clothes to bring a different level of understanding of the people who make them. I want my work to improve a culture and an identity. I want people to wear my clothes and think, “Nigeria, I’d like to go there.”