With the pattern of duplicity and cruelty that conjures the Donald Trump’s policy actions against the people of color, tell me how these ethically malnourished oppressors can educate any organization about good character and accountability? 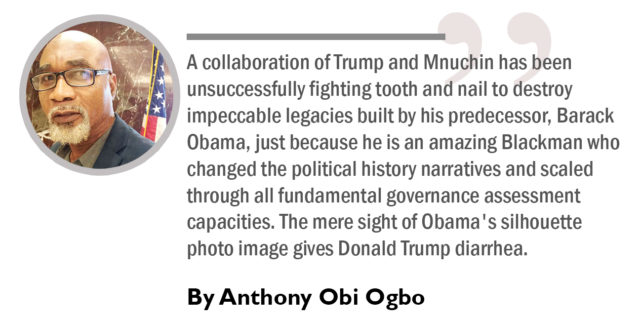 For clarity, the African Development Bank (AfDB) is not like Chase. Nope, it is not the traditional bank where folks drive through a narrow pathway to use the ATM. It is a bilateral development finance institution facilitating sustainable economic and social evolution in its regional member countries. In other words, their core objective is to improve lives through poverty reduction, improved healthcare, promotion of sustainable agriculture, and so on.

Now that we have shoved this out of the way, let’s go to the main menu. The AfDB’s president is elected by its board of governors who are made up of appointed representatives from the bank’s 80 member countries, with voting power comparable to their capital contribution. This year, its current president, Dr. Akinwumi Adesina, a former Nigerian agriculture minister, is due for re-election for a second term of 5 years. However, there is something that just came up.

Yes, there is always something. A group of unidentified whistleblowers had accused Adesina of favoritism. They claimed he gave contracts to acquaintances and appointed relatives to strategic positions at the institution. Accordingly, the matter was investigated and Adesina was exonerated by a committee set up by this institution.

Just recently however, the United States demanded an investigation into the Bank’s decision exonerating Adesina.  U.S. Treasury Secretary Steven Mnuchin representing the administration had rejected the decision and called for an independent probe to facilitate a reassessment. According to Mnuchin, “Considering the scope, seriousness, and detail of these allegations against the sole candidate for bank leadership over the next five years, we believe that further inquiry is necessary to ensure that the AFDB’s president has broad support, confidence, and a clear mandate from shareholders.”  So Mnuchin was clear that his protest was about Adeshina’s reelection.

But this commentary is not about Adesina’s propensity to retain his position. It is not about his character or trustworthiness regarding the office he serves well because he was exonerated by a credible committee. The purpose of this article is to corroborate the consistency of Trump’s regime in tearing down the legacies created or orchestrated by the new-generation Blacks.

To date, a collaboration of Trump and Mnuchin has been unsuccessfully fighting tooth and nail to destroy impeccable legacies built by his predecessor, Barack Obama, just because he is an amazing Blackman who changed the political history narratives and scaled through all fundamental governance assessment capacities. The mere sight of Obama’s silhouette photo image gives Donald Trump diarrhea. It is that bad.

Out of frustration in his failure to handle the COVID-19 Pandemic, Trump launched a barrage of attacks on the WHO.

Then there is this ongoing spiteful animosity against the World Health Organization (WHO). Out of frustration in his failure to handle the COVID-19 Pandemic, Trump launched a barrage of attacks on the WHO. As if that was not enough, he froze America’s funding of the agency, threatening to withdraw membership unless it makes “major substantive improvements within the next 30 days”. One can easily guess what this improvement might be.

Without a doubt, it was difficult for Trump to get WHO to lie for him against China and cover up his inattentiveness toward a virus that has gulped nearly 100,000 lives in the US. But there was also another issue that is seriously eating up Trump’s guts. The leader is African. Tedros Adhanom Ghebreyesus is an Ethiopian public health researcher –the first African in the role.

Mnuchin is one of the executioners of Trump’s fraudulent and malicious policies. He championed every cover-up in all money-laundering charges brought against Trump.

So it is no surprise, when Mnuchin, the Treasury Secretary of a country currently facing the worst economic crisis since the Wall Street fiscal disaster diverted his priority to a financial entity doing perfectly well. Do you remember Mnuchin very well?

He is one of the executioners of Trump’s fraudulent and malicious policies. Mnuchin championed every cover-up in all money-laundering charges brought against Trump. He had defied every congressional request regarding Trump’s transgressions and supported Trump in his attack against whistleblowers.

It is not a coincidence that Mnuchin’s argument regarding Adesina’s whistleblower probe is riddled with hypocrisy. This is because he joined Trump in publicly attacking a whistleblower who filed a complaint about Trump’s dealings with his Ukrainian counterpart, Volodymyr Zelenskiy.

This year, a House Democrat grilled Mnuchin over his refusal to release President Donald Trump’s tax returns to the House Ways and Means Committee. Last year, Mnuchin equally refused to comply with requests and subpoenas by the Democrats for Trump’s tax returns.

Now you could see the pattern of duplicity and cruelty that conjures the Donald Trump’s policy actions against the people of color.

Just listen to Mnuchin making the same argument he just made on AfDB: “We have deep reservations about the integrity of the committee’s process… Instead, we urge you to initiate an in-depth investigation of the allegations using the services of an independent outside investigator of high professional standing.”

Now you could see the pattern of duplicity and cruelty that conjures the Donald Trump’s policy actions against the people of color.  So tell me how these ethically malnourished oppressors can educate any organization about good character and accountability?

While the discussion threads are overwhelmed with opinions about the AfDB and Dr.  Adesina, one thing must be clear: that United States’ action fronted by Mnuchin is consistent with the regimes ethnic dichotomy. It invokes Donald Trump’s ignorance toward matters of governance and further exposes his arrogance and racist demeanor.

And before you ask, let me remind us that there is only one solution to Donald Trump’s horrifying mutilation of America’s democracy. A shameful removal through the November ballot. It is not a choice. It is a call to civic duty.

♦ Professor Anthony Obi Ogbo, Ph.D. is on the Editorial Board of the West African Pilot News.