“He may just be compromising the lives of thousands of Texans to structure his next tenure.” ― Dr. Anthony Obi Ogbo

Texas Governor Greg Abbott has always used his physical paralysis as a talking point to advocate his zeal for overcoming individual challenges. Paralyzed from the waist down since 1984 after an accident involving an oak tree falling on him, Abbott has used a wheelchair ever since. In fact, through this experience, this Governor explained that our lives “aren’t defined by our challenges,” but by how individuals respond to those challenges. 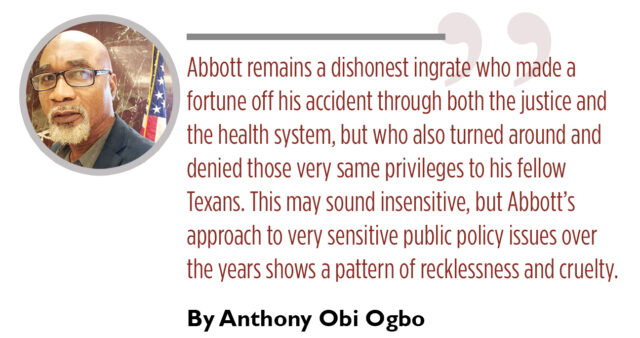 However, since he assumed office on January 20, 2015, Abbott has shown little or no compassion in enacting or endorsing policies that favor the wellbeing of others. In the election campaign leading up to his governorship in 2014, Abbott’s stone-heartedness to matters of public policy came up when his challenger, the Democratic State Senator Wendy Davis drew attention to the matter.

Davis unequivocally portrayed Abbott as a dishonest ingrate who made a fortune off his accident through both the justice and the health system, but who also turned around and denied those very same privileges to his fellow Texans. This may sound insensitive, but Abbott’s approach to very sensitive public policy issues over the years shows a pattern of recklessness and cruelty.

It may be recalled that in April 2020, when the world was still under a COVID lockdown, Abbott issued several Executive Orders detailing an ill-informed plan to open businesses and activities in Texas. Even in June when cases in Texas were rising, Abbott insisted that there was no need to modify his failed strategy. The situation got worse with unimaginable daily death rates.

At the time, Texas broke COVID records when more than 5,000 people tested positive―the highest number since the start of the coronavirus pandemic. Houston Mayor Sylvester Turner also announced that 97% of the intensive care unit beds in the city were filled at the time, with more than one quarter occupied by those suffering from coronavirus. These were alarming moments in the pandemic ignored by a selfish Governor who just did not care.

But this past Tuesday, Abbott again shocked the entire world when he announced the revocation of orders regulating the spread of the coronavirus pandemic. He announced the lifting of the statewide mask mandate and opening of all businesses at 100 percent capacity. To make it worse, he invoked the usual anti-mask conspiracy phrase that people and businesses do not need the state telling them how to operate.

Ever since this announcement, news outlets have been agog with controversies emitting from all political spheres. Abbott tried to defend his stupidity but made it worse each time he verbalized a defense. He claimed that “with the medical advancements of vaccines and antibody therapeutic drugs, Texas now has the tools to protect Texans from the virus.” But local leaders from across Texas immediately took to the air to lampoon Abbott for ignoring Centers for Disease Control (CDC) recommendations and putting the lives of millions of Texans at greater risk.

Former State Representative, Beto O’Rourke, called Abbot’s decision “a death warrant for Texans.” Julián Castro, United States Secretary of Housing and Urban Development, called it “a desperate political move by a politician scared that he’s lost a lot of support after his incompetence with the recent winter storm.” Representative Sheila Jackson Lee expressed disappointment when she described “the State of Texas that has for many weeks been a hot spot for COVID-19.” San Antonio Mayor Ron Nirenberg lamented that Texas “is still not out of the woods.” Houston’s Mayor Sylvester Turner called the move a “national embarrassment.” According to Turner, “every time we start moving in the right direction the Governor steps in and sets us back and makes all of our jobs harder.” In addition, the Fort Worth Mayor Betsy Price, who is a Republican, called Abbott’s order “premature.”

Even when this Governor realized that his actions were reckless and dumb, he did not back down from disgraceful idiocy. He went after President Joe Biden who equally criticized his decision, claiming, without evidence, that migrants coming into Texas are exposed to the coronavirus by the state’s residents. This was the same dude who held up every effort by the Biden administration to provide federal funds for testing migrants released from custody.

Abbot’s latest comedy displays might not be coincidental. He may just be compromising the lives of thousands of Texans to structure his next tenure. November 8, 2022, Texans will have another opportunity to elect a governor. As the state does not have gubernatorial term limits, Abbott is looking to run for a third term. In other words, more drama would be expected from Abbott to incite tension, create fear, and cause more COVID fatalities among the masses to galvanize his political base.

Abbott’s approach to managing this pandemic has been a total disaster.

Just like the former president, Donald Trump, Abbott’s approach to managing this pandemic has been a total disaster. He has convincingly revealed his inability to understand his mandate to protect lives. Since the pandemic, he has unwisely flip-flopped from one thoughtless decision to the other and has proclaimed unfeasible orders inconsistent with the COVID statistical reality of his state.

In addition, this is a state still recovering from a damaging winter storm that left millions without power or clean water, which also hindered the state’s pandemic response by causing a sharp increase in vaccine doses that went to waste. Reportedly, about 1,500 doses of COVID vaccines went to waste from Texas power outages.

♦ Professor Anthony Obi Ogbo, PhD, is on the Editorial Board of the West African Pilot News