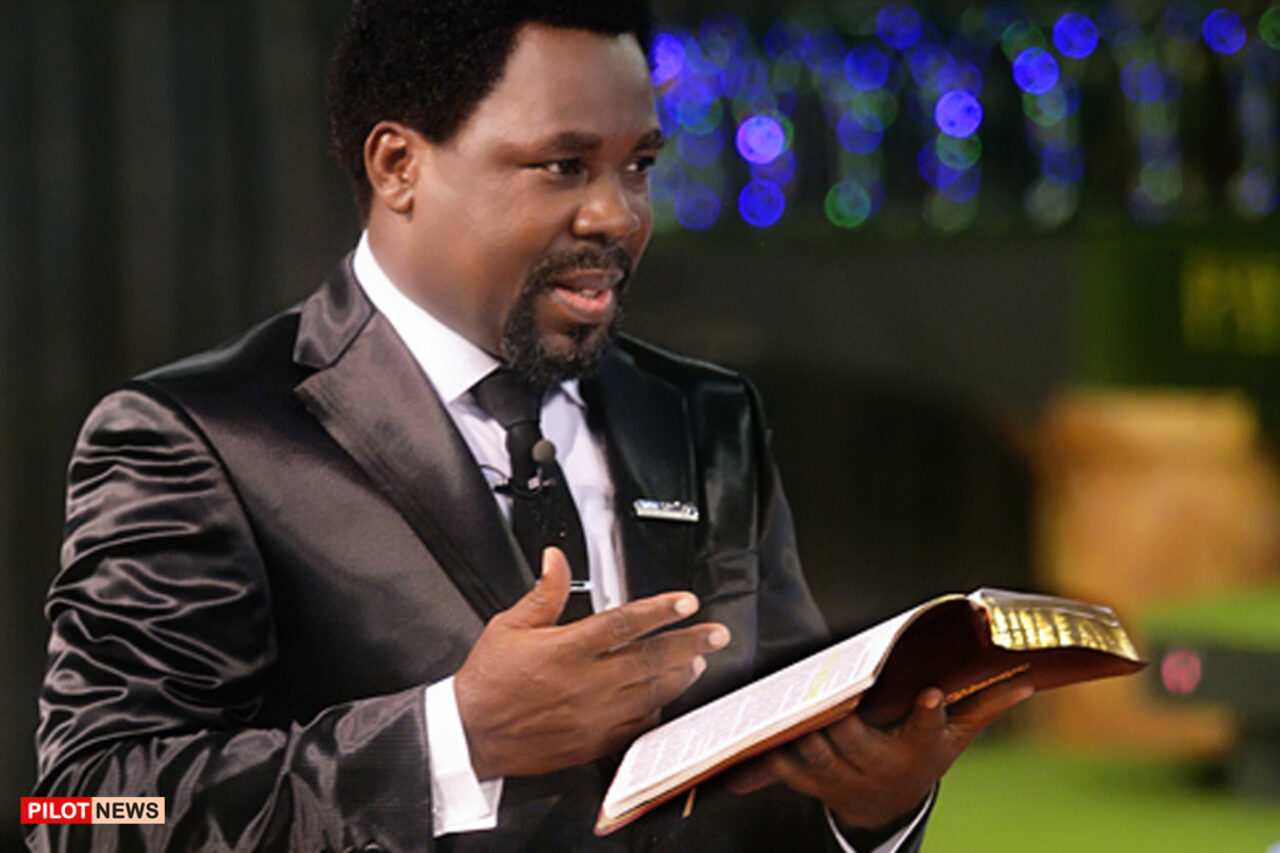 ABUJA — The Senate on Tuesday honored the founder of the Synagogue Church of All Nations (SCOAN), late Prophet Temitope Balogun Joshua, with a minute silence.

The honor happened as the Senate President, Ahmed Lawan, sent a condolence message to the family of the deceased.

Prophet Joshua passed on Saturday night at the age of 57.

The decision of the Senate followed a point of order moved by the Deputy Leader of the Senate, Senator Ajayi Boroffice after he intimated his colleague of the passage of the popular pastor.

While citing order 43 of the Senate Standing Rules, Boroffice lamented the death of the man of God.

He described him as a passionate leader who contributed immensely to the development of Ondo State in particular and Nigeria in general.

He then urged the Senate to send a delegation to condole with the Ondo State Government and the family of the deceased over the irreparable loss and also called on the Federal Government to name a befitting monument to immortalize Pastor Joshua.

“Prophet T.B. Joshua was an illustrious son of Ondo State who contributed his quota to the development of the state.

He contributed to the advancement of sports, education, health, and other social amenities in the state,” Boroffice said.

The Ondo North lawmaker added that “I bring to the attention of the Senate, with heavy heart, the death of Prophet Temitope Balogun Joshua, prominent philanthropist and founder of Synagogue Church of All Nations (SCOAN) on June 5, 2021, at the age of 57;

“He received his early education at St. Stephen’s Anglican Primary School in Arigidi Akoko, Nigeria, between 1971 and 1977;

“The late Prophet Temitope Balogun Joshua was a man of humble beginning who rose to build the Synagogue Church of All Nations (SCOAN), a ministry renowned for charity; with membership from across Nigeria, Africa, Latin America, and other parts of the world.”

Senator Boroffice lauded Joshua saying: “He epitomized the true Nigerian spirit, he was religiously tolerant, welcoming to all ethnic inclinations, and believed in the unity of Nigeria.

“The late Prophet Temitope Balogun Joshua was an illustrious son of Ondo State who contributed his quota to the advancement of Ondo State, sponsored electrification projects in communities, installed transformers, and largely provided succor to the needy in the society.

“The late Prophet Temitope Balogun Joshua was renowned for his humanitarian services in key areas like community support, scholarships, disaster relief, education, sports, and support for migrants and deportees;

“His commitment to peace and stability of this country was quite mind-boggling as he committed huge resources to live changing rehabilitation programmes for former Niger Delta militants;

“He was a major promoter of sports development in Nigeria, established the Emmanuel Soccer Academy and my People FC for the purpose of helping young talented footballers and some of the young footballers have made Nigeria proud in international competitions;

“He was a great ambassador of Nigeria as he sponsored a combined team of medical personnel and humanitarian workers to Haiti aftermath of the Haiti earthquake in 2010;

“The late Prophet Temitope Balogun Joshua significantly promoted tourism in Nigeria as thousands of religious tourists from Africa and other continents fly into Nigeria to attend his church’s weekly services;

“He was a consummate and compassionate Nigerian who supported community development in great measures and paid his dues in Nation-building;

“In recognition of his altruistic contributions to National development, the Federal Government of Nigeria honored late Prophet Temitope Balogun Joshua with Order of the Federal Republic (OFR) in 2008;

“His death is a great loss to Ondo North Senatorial District in particular and Ondo State and Nigeria in general;

“Prophet Temitope Balogun Joshua lived a selfless and impactful life, and left a legacy of service and sacrifice.”

In his remarks, the Senate President said: “Let me condole the family of T. B. Joshua, and also say that our country and Nigerian leaders across all levels need prayers.

“We need the intervention of God while we continue to do our work and perform our functions and duties.

“Prayers from everyone will be very important and we continue to ask for that because this nation and the people believe in God, and we believe that God can help us in any way that is possible to overcome the numerous challenges our country is passing through.”

Chairman, PSC On COVID-19 In Nigeria Expresses Concern Over The Spread Of The Disease