The colorful carnival which also is the largest African cultural festival in the City will hold at the Discovery Green – 1500 McKinney on Saturday, July 16, 2022.

IgboFest Houston, a cultural entity and festival that showcases the African heritage and Igbo culture to the great city of Houston has partnered with the Texas Southern University (TSU) to promote, embrace, and encourage culture, and diversity education in the community.

TSU will be visibly present at this festival to showcase their potentials as an inclusive, equitable, and welcoming institution for all members of the community. Internationally renowned TSU’s Debate Team will also be at this event to perform the “Igbo Landing Mass Suicide of 1803”, a rendition of one of the largest mass suicides of enslaved people that took place when Igbo captives from what is now Nigeria were taken to the coast of Georgia.

According to Dr. Chris Ulasi, TSU’s Interim Dean of the School of Communications who also chairs the Houston IgboFeast, “This partnership is highly needed and most importantly, would reflects the mission of the IgboFest in building cultural awareness, linguistic diversity through teaching and learning of critically endangered languages, and youth cultural literacy.”

IgboFest Houston has reigned for decades in the City, bringing in performers from across the United States and globally. The 2022 IgboFest will showcase the  Ijele Masquerade, classified as the biggest masquerade in Sub-Saharan Africa. Group performances will range from traditional to acrobatic dancers, whereas other displays will involve very rare masquerades from the Igboland. Expected at this event are; Government representatives including Houston’s Mayor, Sylvester Turner, Congresswoman Sheila Jackson Lee, Congressman Al Green, Texas Hour Rep. Jarvis Johnson, and others.

This colorful carnival which also is the largest African cultural festival in the City will hold at the Discovery Green – 1500 McKinney on Saturday, July 16, 2022. Admission is free. Bringing the African heritage and indeed the Igbo culture to the most diverse city in America is traditionally motivating and spiritually authentic. 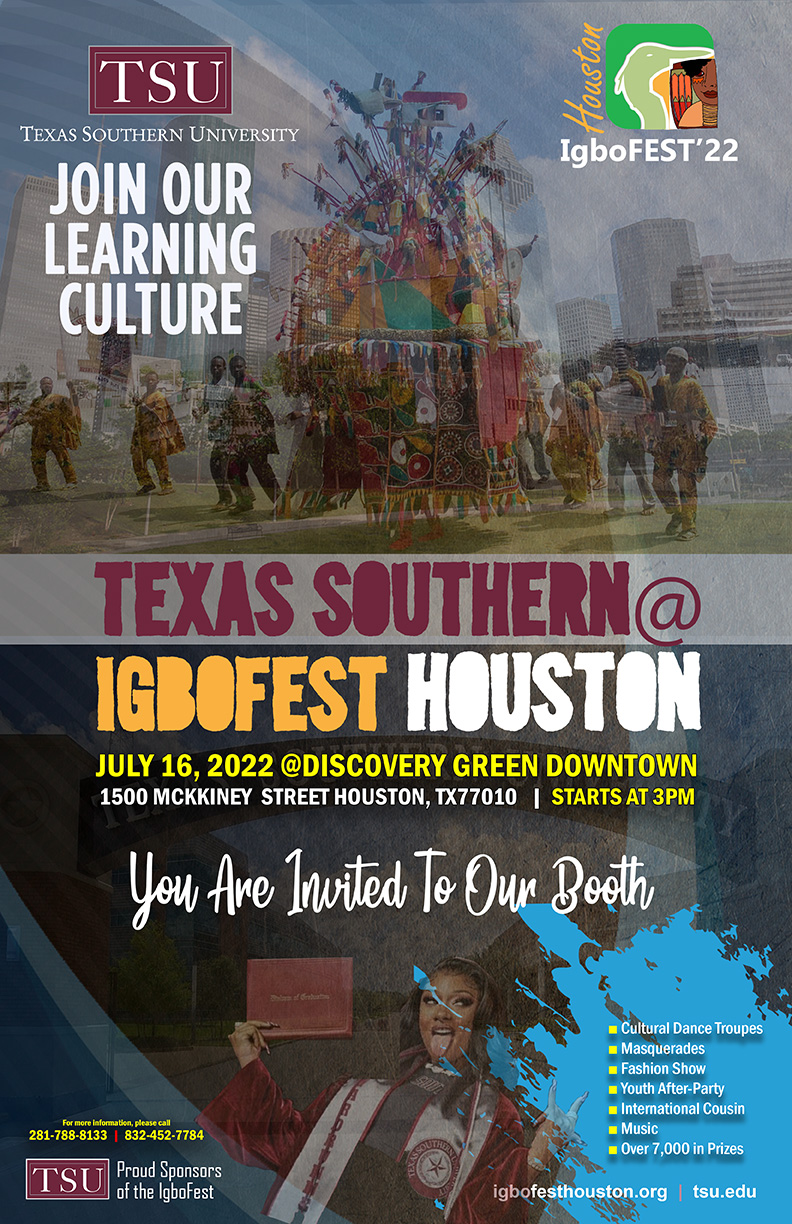 Texas Southern University, one of the nation’s largest HBCUs (Historically Black Colleges and Universities), possesses an impressive array of undergraduate and graduate programs, a diverse faculty, 80-plus student organizations, and an alumni network comprised of educators, entrepreneurs, public servants, lawyers, pilots, artists, and more, many of whom are change agents on the local, national and international stage.