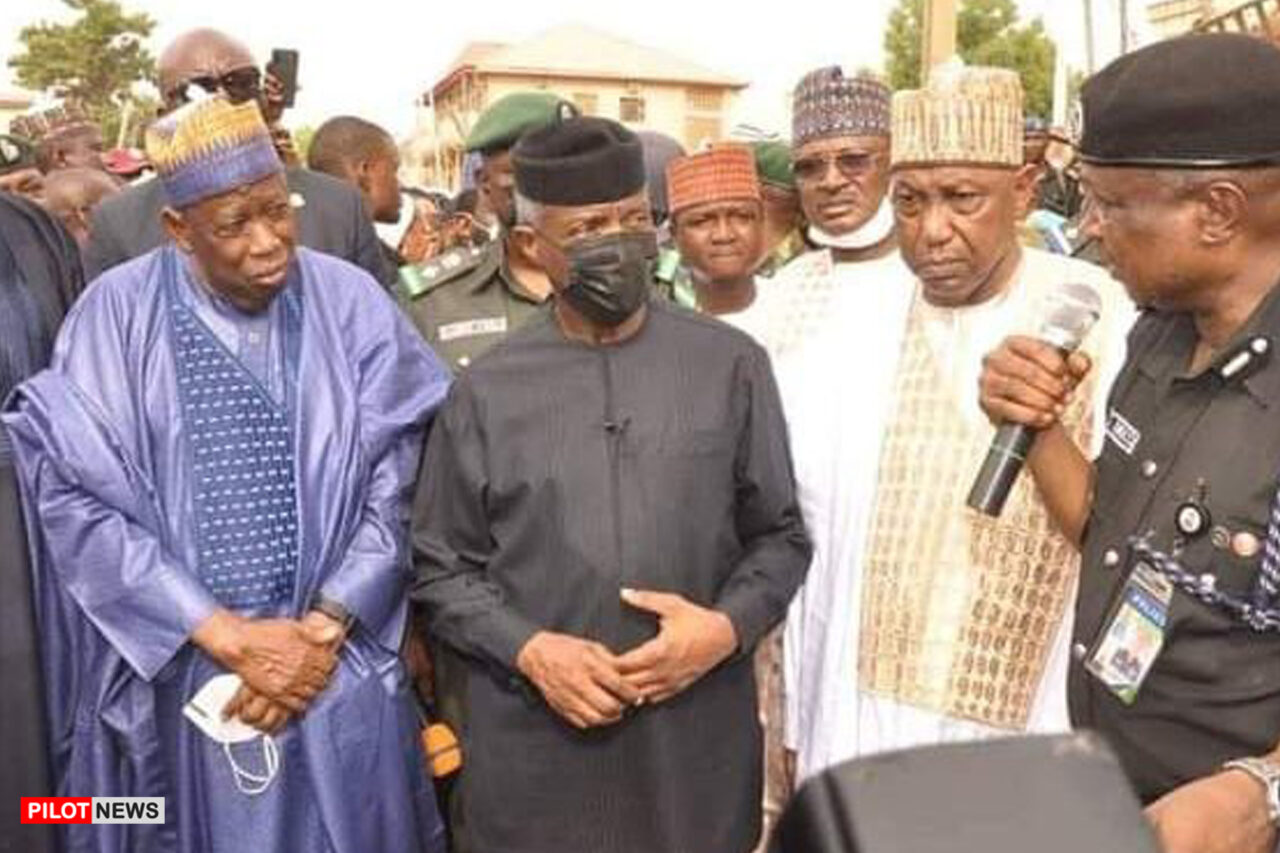 Vice President Yemi Osinbajo visited the scene of the gas explosion at Sabon Gari area in the state capital Kano and commiserated with the government and people of Kano state over the incident.

Recall that a gas cylinder blast occurred on Tuesday morning at No. 01, Aba/Court Road, Sabongari Quarters Kano opposite Winners Kids Academy which claimed no fewer than nine lives and many sustained injuries.

The incident happened around  9:30 a. m causing serious panic within the community as people ran helter-skelter, making frantic phone calls to ensure the safety of their loved ones.

Shortly after the blast, parents and guardians rushed to schools and hastily withdrew their children, while schools around Sabon Gari and its environs were shut down immediately.

The Vice president who was accompanied to the scene of the explosion by Governor Abdullahi Umar Ganduje, expressed shock that little school children were among those injured.

Osinbajo who described the incident as devastating sympathized with the victims and enjoined relevant authorities to take preventive measures against future occurrences.

He prayed for the repose of the souls of those who lost their lives and the quick recovery of injured victims.

Governor Abdullahi Umar Ganduje thanked the Vice President for the concern and pledged medical and financial support to victims of the explosion.

The spokesman of the National Emergency Management Agency (NEMA) Manzo Ezekiel in a statement said nine corpses have been recovered from the scene of the explosion.

He said the Director-General, Mustapha Habib, who visited the scene of the explosion, coordinated the rescue operations.

The statement read in part: “Nine dead bodies have been recovered so far from the rubbles of a collapsed building beside a primary school following explosions from a gas cylinder at Aba Road in Sabon Gari area of Kano.

“Director-General National Emergency Management Agency, Mustapha Habib Ahmed, was at the site of the incident and coordinated the rescue operations.

“He mobilised excavators being used for the rescue operations and said NEMA team will ensure complete removal of the rubbles to retrieve all trapped persons.

“Furthermore, the DG instructed the NEMA rescue team to remain at the site until the conclusion of the rescue and to work together with security agencies and other response organisations present at the location.